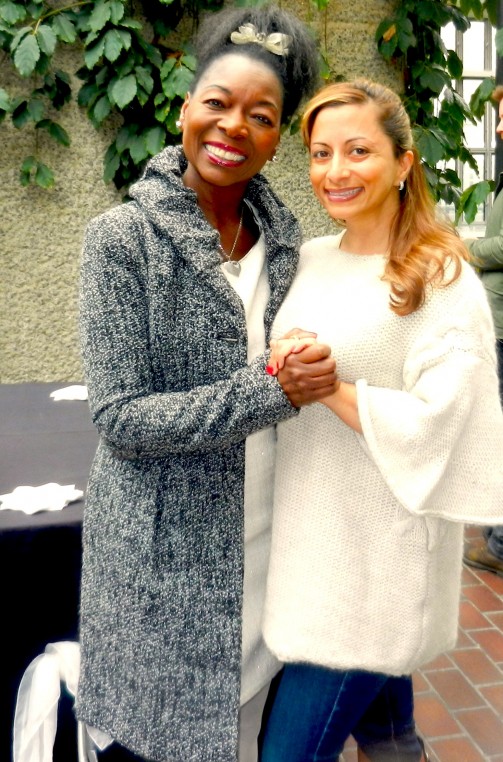 JASMINE WITH FLOELLA BENJAMIN AT THE BARBICAN- RTS STUDENT AWARDS.
Started the week attending the Barbican for the Royal TV Society Student Awards which is a great opportunity to celebrate the next generation of amazing TV makers this country will see fulfilling our visual taste buds with their content.
Numerous pre and post grad university students across the country enter their work into the annual competition and this was the final award distributing moment. As I walked in with my friend- Cookie- who runs Fortune Cookie PR (formally Cookie-the female rapper from the infamous UK hip-hop collective Cookie Crew), we grabbed our programmes and a cup of tea and biscuit. Just as we were chatting away I grabbed Cookies arm and staccato voiced said ‘’oh. My. Gosh. Is. that. Really. Her?’’ And lo and behold, there like an apparition before us was the woman who unknowingly brought up millions of British kids on TV in the 70’s and 80’s- the wonderfully maternal Floella Benjamin!
Now of course she is Baroness Floella Benjamin! We unashamedly abandoned our cookies and coffees and sprinted across to introduce ourselves to this Bastian of our childhood. Floella was gracious and welcoming and initially assumed we were students in the competition. We laughed at her thinking we could be so young and thanked her for making our day. Instead of simply being pleased to meet us, and waving us on our way, Floella and her gorgeously charming husband Keith chatted to us for ages. Keith is a well-known TV maker in his own right and they’ve been married 4 decades! Floella entertained us with tales of how she had to hustle to get into the game early in her career. She was great friends with carry on star Kenneth Williams and had us laughing at anecdotes of her conversations with him. Floella has a Trinidadian background and looked very chic in what I presumed must be a Chanel frock and loafers. She winked and revealed ‘’its from TK Maxx darling!’’. Back in her heyday Floella was fighting the diversity cause for people on TV by sneakily asked her BBC producers ‘’Cynthia, why don’t we include a black dolly/ Asian viewer/etc etc’’
Even when on a very important board panel discussing who’s heads should be on a set of stamps Floella convinced the panel that black faces needed to be represented so ‘’all the young children that have grown up with me have something to relate to’’
In her presence people from every walk of life just kept approaching her for hugs, photos and more with squeals of excitement. Her husband recalled ‘’ not so long ago, we were exiting the house of lords, and a policeman stopped our car and abruptly asked me to wind down the window. I did so and the policeman asked me ‘’is that really her? Floella?’’ LOL
The Floella effect! Which begs the question; if she still has this effect on all members of the public born across decades, why isn’t she still on television? She looked bloody amazing and when she spoke all around fell silent in awe and genuine interest on what this very experienced, worldly-wise lady had to say! 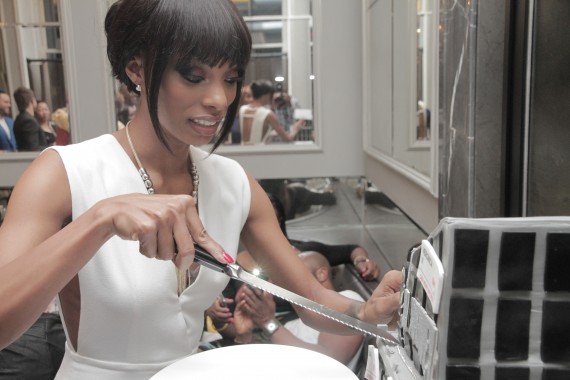 VERONICA V CUTS HER CASH MONEY CAKE!
Next I caught up with the adorably chic new artist signed to Cash Money Records- Vanity Gardener otherwise known to her fans as Veronica V! I had been invited to host a dinner in honour of the lovely lady but alas it fell upon the same date as my father’s funeral so I missed out, however I did manage to catch up with Veronica afterwards who filled me in on all that went down.
DINNER GUESTS included people from many different areas of our scene. From the brand/fashion/media world were Adidas lady Paola Lucktung, Mandy Pascal and Zainab Vandu-Chikolo from BURBERRY. From Veronica’s team were marlin Lynn, Veronica’s sister Valencia Gardner, Katina Bynum – Senior Vice President, Marketing – Republic Records and more. Also in the house were power players fro Cash Money- Ronald Williams – aka Slim, Vernon Brown – Cash Money Records Label Attorney/Business Manager , my long time pal Vivian Scott Chew from Timezone International. Also in the house were two new cash money artists Chris Richardson (who was on season 6 of ‘’American idol’’) and Caskey! 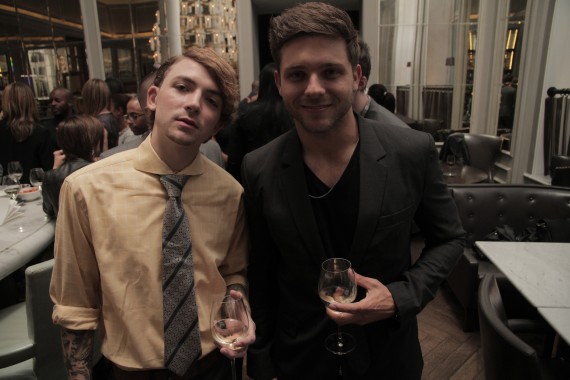 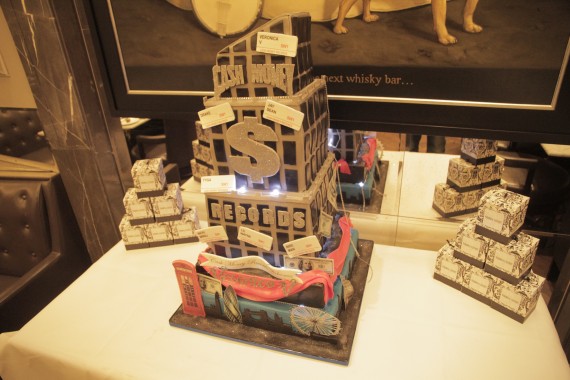 THE CASH MONEY CAKE- FOR A CREW THAT ALWAYS HAS ITS CAKE, AND EATS IT TOO.
Slim and Vernon didn’t sit for dinner, they arrived close to dessert delivery. They made a nice speech thanking everyone for attending and gave some insight on their plans for Veronica and Caskey ( a rapper that reminds me of puffy with his flow LOL) and Chris Richardson (who sounds like the new Justin Timberlake). Bringing the other 2 artists along on the promo trip was to give them an introduction to the UK/European media (they also went onto Paris and Amsterdam).
Dinner was scrumptious. Starter- Loch Var Smoked Salmon, Capers, Lemon, Brown Bread and Butter. Main- Roast Goosnargh Chicken with White Coco Beans, Mushrooms and Tarragon Sauce. Afters- Blackberry and Apple Pavlova with Caramelised Apple Or Banoffee Cheesecake with Salted Caramel Ice Cream. Mouth watering yet? 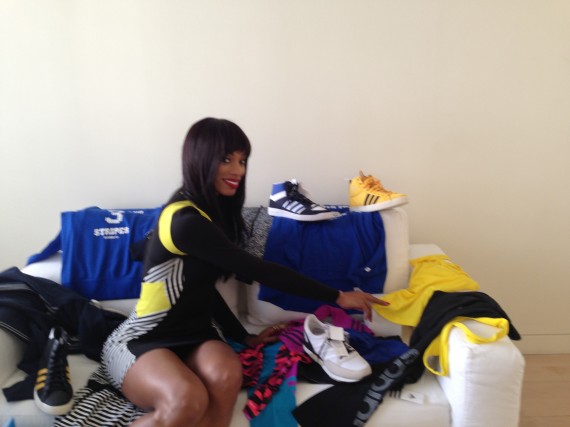 VERONICA CHECKS OUT HER ADIDAS GOODIES!
Over a cuppa Veronica told me that she ‘’started singing when I was 5, my mom said that I was in the backseat of the car belting out Shanice’s ” I love your smile” and she turned around in complete disbelief. I was in choir since the 3rd grade church and school so of course when I was 10 and I was fully ready to pursue music fulltime she was extremely supportive. I started by recording demo’s and that turned into tons of performances I just felt from God that music was my calling’’.

Veronica revealed all about her single ‘What Happened To Us’. ‘‘It was produced by the incredibly talented Polow da Don is a very special record for me. It was actually the very first record I ever recorded with Polow. We all knew it was special from the moment the intro came on. He wanted to give me a different type of swag so I followed his lead and wahlah….. I think women will be able to feel me with this record! I want to be a voice for women all over the world. The timid, the shy and the bold. Ive had the pleasure of working with Mr. Beatz who is a part of my YMCMB family as well as Detail, Polow Da Don, Jrock, Danja, Timberland, Ammo, King, Soundz, Morris Brothers, Darkmatter, Bigg D, RL from Next, the list goes on and on. God has definitely blessed me abundantly to be able to work with the talented people that I have. The thought of it humbles me greatly’’.

For years people have compared Veronica to both Lauryn Hill and Brandy to which she acknowledges ‘’ I LOVE them both so much that I was ecstatic to even be in the same sentence with them, I thought it was pretty cool.’’

Her story of hooking up with cash money is the usual great feel good story of a middle man pointing in the right direction ‘’Wow, Cash Money was a primary example of being in the right place at the right time! Period! We both recorded at the same studio in Miami and I guess one day the owner of the studio was in a meeting with Slim and Baby and he told them that they had to hear this girl that had been recording at the studio. I guess they liked what they heard because the rest is history! God is good..’’
Talking about her future the newest lady on cash money grins ‘’I see myself touring all over the world, modelling, acting, an activist for abused women and children. I literally want to do everything that God has ordained for me to do. And more importantly, I see myself always remembering where I came from and who helped me get to where I am. No worries, cause I know who butters my bread and that’s God! Can the church say Amen……….Amen!’’