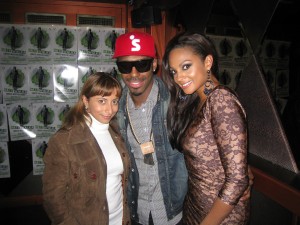 November in London town saw a lot of music activity from established superstar music acts, as well as old skool artists with nothing to prove, alongside newbies with absolutely everything to prove.
To kick start things one of the coolest female act of all time- En Vogue- graced the indigo venue at the 02 Arena. I put aside all my old bitter memories of ex boy friends dribbling and gushing over dawn from the band and trying to make myself wear the tiniest little black dress and highest vertiginous heels to try and emulate the girls back in the 90”s and stepped into the arena full of excitement for anticipation of singing ‘’oohh my first mistake was….i wanted too much time’’. The original line up-the ladies looked as slick and sexy as ever.
The band lit up the stage with great memories of music. It was a straight 9 out of 10 show. For it to have been a 10 there would have needed to be another group like SWV or Brown Stone as a supporting act or clashing each other like a clash of the titans.
En Vogues Interaction with the crowd was excellent, getting the audience involved with every part of their performance speaking and asking the crowd questions they had the crowd jumping, dancing and waving their hands.
Their vocals were as strong as ever and nothing seemed to have thinned or weakened their voices from the 1990’s –it was as if nothing had changed. Hell no!-it was the same wonderful goose-bumping voices that first broke onto the scene all those years ago, singing all the greatest oldies. The audience really responded well with a great atmosphere within the O2 with all ages of people singing along from all different backgrounds whites, blacks, men, women, gays and heterosexual.
Anyone attending would have said it was money well spent as people left the arena still singing aloud. My mates mum said they were just as good as when she first watch
them nearly 20 years ago! It really was a must see concert!.

Next up I was invited by Melissa from G-Mag to attend ‘The salute to The Wailers’ show about Jamaica’s first super group. At Hammersmith Apollo the crowd outside was so sparse I wondered if we had the right date. We queued for a while and even though it was cold outside it was even colder inside the venue. I kid you not. It was freezing!. The crowd that had gathered might have wanted to take their coats off and dance to the music that they were clearly enjoying but there was no chance of that as the Apollo stayed freezing cold all night with not even an apology or acknowledgement from the stage of the audiences discomfort. Is it any wonder that music acts are all choosing to perform at the 02- once upon a time West London ruled with Wembley, Shepherds Bush and Hammersmith-that is a distant memory now.
The show itself plodded. It was billed as the reggae event of the year.  The band and backing singers were going through the motions. The show used a different singer every few tracks to represent a different era but they had no presence-on and off as if rehearsing or doing a walk through. The experience was sold as a vibrant story but it really wasn’t. The tracks weren’t all introduced and when the narrator did come onstage he was barely intelligible and he should’ve been on a lot more and directed us through the story. Whilst the die-hard reggae fans made the best of it in the cold and sang along it really was a poor attempt at a big show and I have in my time been to some amazing reggae concerts and alas this had all the potential of being one.

Finally songwriter to the stars, American Nate Walka who has won a Grammy Award for writing for  Jamie Foxx amongst others held a listening party for his latest music at Molton House in the bond street area. No expense had been spared as both Nibbles and champagne were being passed around all night. Unfortunately I wanted a soft drink or water and neither were available-only champagne-how ironic-and they say there’s a recession?!.
Nate has also written tracks for Alesha Dixon who was also in the house looking lovely and truly letting her hair down. She laughed, joked, drank and had a great time all night as well as hosted the evening for her friend Nate.
A lot of the London inner urban circle from all walks of life attended and for a practically unheard of artist it was a very impressive turn out. Comedian Kojo and I wanted DJ for the night Manny Norte to play ‘’Westside’’ by TQ as TQ was sitting alongside our table. Industry folk like radio1xtra DJs, singer Cherri V, Jamal Edwards founder of SBTV, Nadine Scott from Michelle Williams management team, the flavour magazine team and many ,many more underground uber cool faces were in the house.
Nate finally turned up fashionably late and after Alesha introduced him he jumped on the decks and talked us through a very fast version of his new mix tape. It was a surprising listen as after his hit songs for other acts we expected catchy, soulful, melodic hooks, instead we had a quite heavily rap based mix-tape with various influences which was just as catchy but unexpected. Nates just been signed to an indie label called Versatile so a lot of acts coming up were in the house, hopefully hoping they could grab a hit song from him. Look out for him!