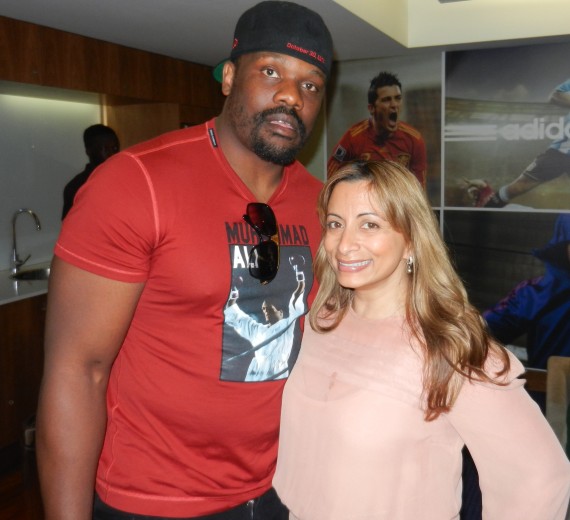 JASMINE WITH ROADMAN BOXER DEREK CHISORA.
So we’re all looking forwards to this weekends bank holiday, but last week all the hype across the UK was the arrival of the Young Money Cash Money young prince Drake, who had the biggest show of his life so far at his concert at the 02 arena. On arrival I was surprised at the very young, mixed pop crowd swarming around the venue. I wondered if I had walked into a one-direction concert on the wrong date. But after seeing the merchandise stand-selling drake clothing I reassured myself I was truly at the right show. The t-shirts were £30 whilst the hoodies were over £100! And lots of fans had bought them!. How crazy is that? In this day where people have to look after every penny £100 is deemed an appropriate price for a basic hoodie with a logo? I mean if it were designed by a designer fashion house with a label and cut that reflected the quality then fine but a basic hoodie with a logo? Drake’s team are having a laugh-with an extremely heavier and heavier bank balance. With his label Cash Money Records and EMI Music having settled EMI’s recent lawsuit & their financial disputes I guess they now have even more dollars being flung around like its Christmas at the strip club. Oh well. I guess if you’re going to buy it you’re the fool right?
Once my people and I had got over that initial shock we wondered over to Nandos for a quick pre-show chicken thigh only to see drakes record label person jumping the queue with her plea to the waitress that drake needed to eat before he went onstage and her order was worth well over £100. Oh how we laughed as we chipped in with ‘’our order for 6 people is going to come to well over £100 too so stay in ya lane’’. (Having written that now I feel that perhaps the £100 hoodie is worth more than 20 minutes in Nandos lol).
With the distant echo’s of support act Labrinth doing his thing onstage we hurried up to the Adidas VIP BOX where as usual the movers and shakers of the scene (including Olympic hopeful gymnast Louis smith) were all congregated with fancy food and beverages. In my excitement I kept dipping the tortilla chips into salsa and guacamole and accidently had it flying all over the place including my blouse and the plush carpet- which a very zealous adidas big wig immediately jumped down to wipe clean. Sorry. You can take the girl out of the hood…..
As we were getting our drinks ready and catching up David Haye’s best mate, boxer Derek Chisora walked by our box and spotted someone he knew so popped in to say hi. I was feeling very awkward. After all I –like most other red-blooded women- feel like I have a loyalty to David Haye. After all he is a fine specimen. I said hi to Derek as my mate totally threw me under the bus by exclaiming in a loud voice ‘’ooh that’s very controversial jasmine-after all you LOVE David Haye’’. awkward.com.

Once the show started I admit I was expecting bigger and sexier staging as I see Rihanna as being a female equivalent of drake in popularity and her staging at her recent tour was extremely expensive and elaborate but Drakes was very simple with a bank, DJ and lighting graphics backboard. I was also disappointed that live Drakes breath control needs a lot of work. He couldn’t keep up with his own studio vocals and was performing to a backing tape of his own vocals so often you saw the moment where his mic isn’t to his mouth but the lyrics are still heard.
The style of the show was very basic but his fans didn’t seem to mind. He staggered monotonously through song after song and of course when his big hits made an appearance the crowd was sporadically excited. I can’t really take him seriously though when I consider his middle class happy educated background and then see his stage character swear like snoop with nearly as many m****** f****** thrown around throughout his set. What’s that about?
The energy did seem to pick up in the 2nd half of the show with the lighting back board throwing out some much more dynamic images.
I know that I have a ride or die loyalty to jay z after working alongside him around the planet for so many years but I have to say it REALLY grated me when Drake started pointing out fans in the crowd by describing what they were wearing. Every hip-hop fan knows that’s a classic jay z live strand. Jay does it for 3 minutes max. Drake did it for around 20 mins. He might as well as have shouted out the pink nail polish on my feet too, I’m sure he pointed out nearly every one of the 10,000 fans in the arena.
However I did warm to him towards the end where he seemed more humble as he revealed this was the biggest show of his career so far and he had felt very nervous before going onstage.
After spending so many years watching British acts trying to be on the Americans jock strap, It was ironic to hear Drake continuously shout out UK acts Sneakbo (twice), Wiley and Shola Ama. He also hollered at Florence and The Machine twice and pointed them out watching in the central sound desk.
As we left we spotted young fans all swarming around sex tape Tulisa in the box next door to us. 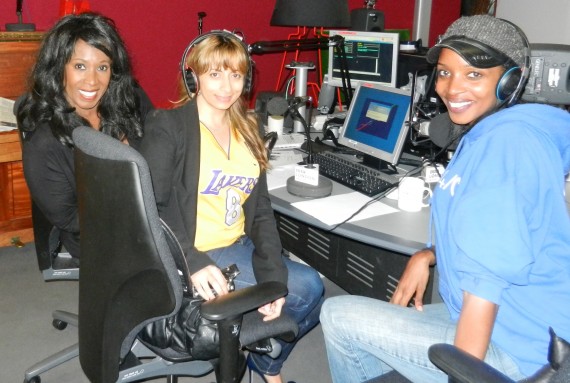 Saturday night was spent on the radio in the Ladies lounge on BBC Radio London with comedienne and script writer Angie Le Mar where myself and TV presenter/actress Josie D’Arby debated all the weeks latest news including woman beater Denis Waterman, the Trayvon Martyn tragedy and many other subjects.