This weekend I joined hundreds of young people at Ravensbourne College next to the o2 arena where we gathered for a day titled Industry Takeover. A day where young people can attend a variety of seminars, panels and performances to educate them about getting into the music industry. 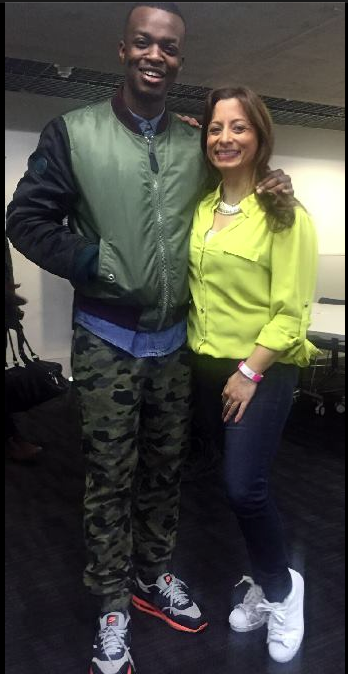 I was chairing two panels. One with two music industry icons of past, present and future. One is a widely respected legend of a man that’s kept his head down, and is always described as having gone from the tea boy to president of island records. He’s the Michael Jordan of the industry bigwigs-he’s signed a lot of our favourite music acts, and guided them to huge careers and so has a mammoth plethora of knowledge, about how you can make it in this game! The other, is a breath of fresh air in our industry- a recording artist, spoken word performer and public speaker, that’s been winning over hearts and minds everywhere, from the living room to the boardroom since he was a student. Already nominated for awards, and aligned with big brand names that are all keen to have a part of him, his star is swiftly rising and his story and thoughts will inspire you all. Guessed who they are yet? Yep- Island Records President Darcus Beese OBE and George the Poet- NW10. LOL.

Both talked about the importance of paying your dues in the game. Darcus used to made tea and collected people’s dry cleaning. Car clamping had just been introduced when he started, so he used to have to go and sit in their cars, wait for the car to be de-clamped and then drive back to the office. George, at 16 started making raps out of his GCSE exam notes. That’s clever.

Both grew up in and around west and northwest London and their communities helped shape who they’ve become. Darcus’ career officer wanted him to be a P.E teacher…then he became a hairdresser, which was around the corner from CBS Records and he did their A&R ‘s hair. A bit of networking later and he’s making tea at the record label. 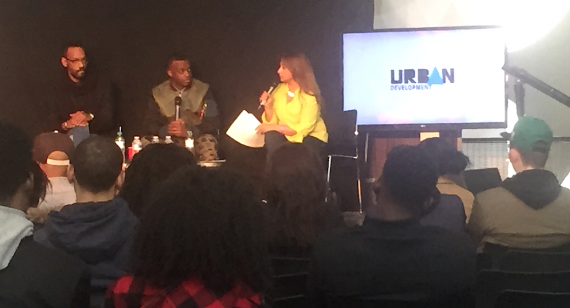 DARCUS, GEORGE AND JASMINE ON THE PANEL.

During the industry takeover event, there were many young black men watching them both on this panel and just by being on the stage, both Darcus and George were showing them that its possible for a black British man to make it. As a testament to bringing new blood through, I’ve watched Darcus hire young people that are from a diverse set of backgrounds and not just into entry level roles but roles with progressive career paths.

George studied Politics, Psychology and Sociology at Cambridge University. Now teachers there are telling their pupils to go and look him up. He’s being used to educate the younger generation at school- how crazy is that? He’s studied at Cambridge, has performed at the Royal Albert Hall, Chambers of commerce, published poetry guidebooks, and been to Buckingham Palace a couple of times. A great leap for a young boy who grew up on an estate in Neasden, Northwest London. He emphasized that navigating these areas properly has been important and he’s managed to juggle and balance the language of the streets, home and business, but many don’t. 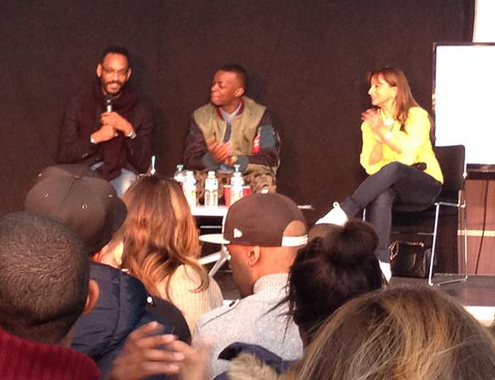 Darcus has signed numerous acts over the years. From Florence & The Machine, Sugababes, Mumford & Sons, PJ Harvey, Ben Howard, James Morrison and Robbie Williams, but the percentage of successes to failures ‘’is unspoken about in the industry’’. For every success story there are at least 5 other failures. Darcus only ever signs the type of acts that excite him- he spoke about Georges qualities that stood out for him, the strongest being ‘’a strong sense of self. ‘’George could’ve gone with many other labels that were offering him more money but he came to us cos he believed in what we were offering him’’.

George spoke about what kind of label head Darcus was and how he supports him day to day. I also grilled him about the fact that when most acts that go from street success to commercial success, managers and team mates get let go in the process-I’ve seen it happen to Jay Sean, Chip and more. I asked what is it important to know about who to keep in your team and when do you outgrow each other? George emphasized that the team had to grow together with the same values and future ambitions or it won’t work.

Darcus educated the audience on ‘’Recoupable costs’’. As we can imagine, the superstar glam factor attracts more acts to the game than their passion for music. Darcus gave us real stats about how all the pictures in papers and online of acts with chauffer’s/free clothes/ bling etc adds up to actual costs that the act has to somewhere along the line pay back-meaning many end up broke. Don’t imagine brands give you free gifts and don’t expect you to talk about them online and in press. Trust, you will be talking about free chicken 24-7 if you accept that black Nandos card.

We also touched on piracy, budgets and how much have things changed in the game regards cash for press/parties, marketing, music streaming, digital teams, Social media and more.

Darcus’ label runs a roster with 90% British acts, so I had to ask him his thoughts on how fairly he thought THE BRITS represents black British acts? Was the recent Kanye / grime movement a good or bad thing and why? We all had a debate about this onstage lol.
Want to know all the answers to these questions and more? Check out the Urban Development site where they will be uploading videos from the day. 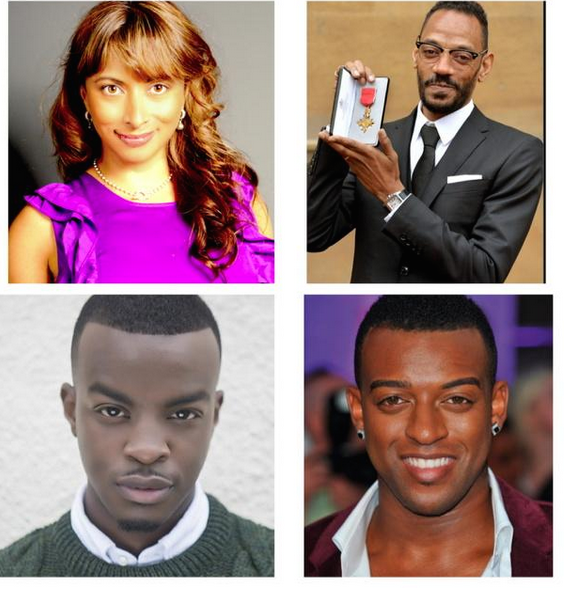 The second panel was with former JLS member / now solo artist and businessman Oritse and his artist A.M.E. Pop boyband JLS achieved a lot of what those that came before them didn’t. Seeing an all black boy band was not the norm when I was a kid watching TV. And they certainly wouldn’t have such huge national success.

JLS were originally signed to Tracklacers production company New Track City, and then went on to become runners-up of the fifth series of the ITV reality talent show The X Factor in 2008, coming second to Alexandra Burke. They’ve had numerous UK no 1 hit singles; the band’s self-titled debut album has sold over 1 million copies in the UK. They won BRITS, MOBOS and more. JLS also sold over 6 million records in the UK alone and more than 10 million records worldwide. And they were originally formed by …now solo star and businessman boss, Mister Oritse Williams!

With all the product placement deals they did, like launching a range of condoms called “Just Love Safe”, teaming up with Alexandra to release a clothing range, releasing JLS dolls, their iconic hoodie range, they endorsed Nintendo Wii Party, they were also part of the Walkers crisps ads, its no surprise that as of 2013,they were the 16th richest reality TV stars in the UK, with an estimated fortune of £6 million per member.

Clearly Oritse soaked in a lot of knowledge during his time with the band and his early grafting juxtaposed with this has meant he’s now set up his own business and started signing acts.

Oritsé Jolomi Matthew Soloman Williams. A long, strong name. I grilled him about his musical journey, the good, the bad and the ugly, so our audience could get a better idea of how to navigate the music industry, and there’s no way better to understand someone’s journey than to walk in a mans shoes. So we talked through his early career moments, how growing up in west London environment shaped him and gave him the qualities he needed to get this far in the music industry. His early influences were Puffy, Jay Z, Russell Simmons and our very own Megaman of So Solid fame. 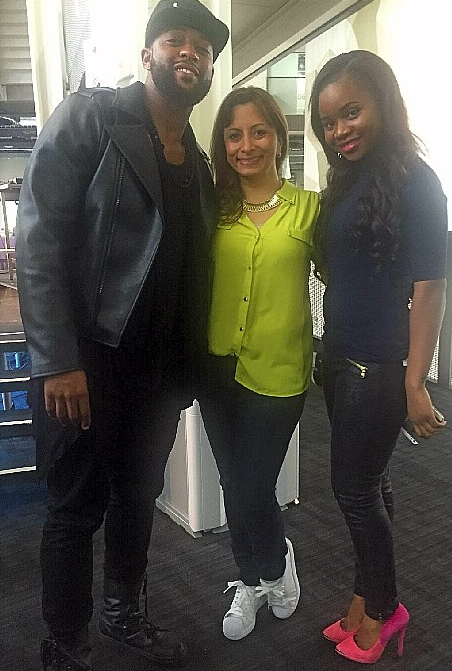 JASMINE WITH ORITSE (NOW OWS) AND HIS ARTIST A.M.E.

Since the age of 12, along with his brothers and sister, he also cared for his mother, who was diagnosed with sclerosis. I myself was my dads carer for his last 3 years and it was all consuming, exhausting and heart breaking- so I know Oritse’s experience as a carer toughened him up for his future.

Oritse says one of his first big breaks was when working at Deal Real Records and DJ Trevor Nelson and the MTV Base show The Lick came in to shoot a show. Oritse brought his guitar into work and even though his bosses had encouraged him not to get in Trevor’s way, he did, and got his first break performing.

Oritse got his first lesson in copyright after having to change his boy bands name from UFO (“Unique Famous Outrageous”) with Aston, Marvin and JB, to JLS (“Jack the Lad Swing”) as there was already a rock band called UFO. But it didn’t hinder their progress and even though they were runners-up to Alexandra Burke on the fifth series of The X Factor in 2008 they still came out winners. I often say that when you lose you really win.

So whilst many ‘’serious music acts’’ have gone on record to dismiss reality acts on music shows as killing and lowering the tone of the music industry- its clearly been a godsend for Oritse , he even won the ITV dancing competition Stepping Out in 2013 with his wife!

It would be crazy to be on this panel and not to mention the ground-breaking news that Zayn left 1Direction the same week. Zayn had mentioned reasons for leaving were stress and wanting to be a normal 22-year-old guy. I made numerous tour diaries with acts like Destiny’s Child, Spice Girls, All Saints and Another Level in the past, so I know life on the road can be intense with the same people day in and day out- but Oritse disagreed, he said it was the best job in the world and he just didn’t understand that angle at all!

Life’s tougher now in some ways. Back in the day- boy bands like Boyz to Men, Another Level and Damage wouldn’t have had to cope with social media trolls and millions of uniformed and aggressive opinions. Oritse admitted JLS got a lot of hate as well as love online, but that it was about treating it all not too seriously.

People often think that JLS’ boss was Simon Cowell, but it was actually industry stalwart Nick Raphael and Oritse has learnt lots from Nick, that he’s now using to form his own company Overthrow Recordings. We always moan that British black people don’t own their own businesses and Oritse’s ambitions for O Street Ent are ambitious.

His mates Marvin and Aston are also releasing solo material- so no doubt that will be positive competition-after all there’s more than enough room in the industry for everyone if the songs are good enough.

Oritse’s first solo single is under his new artist name OWS (as in Oritse WilliamS in case you were confused lol) and is called WATERLINE and features Pusha T. you can see both OWS and his act A.M.E performing at club OSLO in Hackney this April 21st!.