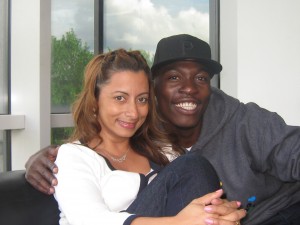 I started this week juggling projects for Channel 4, ITV , MOBO and the BBC which even for me is a major feat-im a great multi tasker but even I have limits! I caught up over dinner with lovely BET News anchor woman Sharon Carpenter as well as worked the MOBO LAUNCH press run (more on that next week!)

Late summer always brings about a whirlwind of urban event excitement in the UK. For the past few years urban comedy and young street style comics have really come through and made their presence felt within the inner city youth circuit. One of these that have gone above and beyond just a weekly show, an appearance here and there and a few small venues is Congo’s most famous export- Mr Eddie Kadi!
Last fortnight Eddie actually made history my performing at the 02 Arena. Not one of the small clubs in the 02 Arena, but the main venue where superstar music acts play. The only comic I recall on this level are is Chris Rock. Edie actually had the scene excited months ago when he first announced the gig, then a few days before the show his PR machine went into overdrive as he staged a sit in at the venue and actually slept on site setting off alarm bells and everything when he mistook a door for the toilet!.
Eddie informed me that after he had performed at the Indigo 02 in the past, his team knew they could sell the arena gig. And from the 16,000 capacity Eddie sold 8,000-a great achievement. ITV’s London Tonight picked up on the show as did Channel 5 and thereafter Channel 4 and the Lenny Henry spot.

The week of his show twitter was popping off with celebrities, fans and friends all talking about the show so it was no surprise to then turn up and find a mile radius in all directions around the 02 were gridlocked. I mean really badly. There were cars honking, people excited, girls abandoning cars with heels in their hands running barefoot into the arena, couples arguing in the standstill traffic, billboard lights flashing car parking directions to help people get in, it was like Armageddon!
The neon lights screaming Eddies name were making me panic that I wouldn’t get inside in time and I through all caution to the wind and instructed my mate to pull into the nearest car park. ‘’but that’s £25’’ he glared. ‘’I don’t care-I am not missing eddies start!’’ I spat back. So notes were exchanged with the lip licking parking attendant before we sprinted from the car to the venue. We got to the entrance to find it looking like a scene from carnival with people collecting tickets, mingling and having photos taken in front of the press boards. PR girls were juggling guests and tickets, wannabee celebs were show boating and last minute ticket buying were all blocking up the area. The VIP entrance was full of celeb’s having their pictures taken against the branding board and small TV crews were conducting quick red carpet style interviews.
I picked up my 4 tickets and legged it hell for leather into the venue and DJ Twin B was entertaining the crowd on the decks.
I had great seats a few rows from the front with comedian Kojo and actor/ muscle man Tiny behind me-so the jokes were flying thick and fast between us.
The show began predictable late. We saw a set that resembled Eddies bedroom (bed sheets courtesy of show sponsor Adidas LOL), there was also a living room set up. And when it did start there were audible sound problems and at one stage some visual technical errors too which had me holding my breath in concern for a few minutes but clearly Eddie and his team were back there kicking some serious ass cos once it got going again it was flawless until the end.
Eddie entered the stage in his pyjama’s as if to prepare for his big night changing out of his PJ’s into his slick suit and tie get up.He re emerged in a very well cut, fitted suit and from here on in the show was a blast.

The evening took on the formula of ITV’s ‘’An Audience With’’ by Eddie telling a few personal stories and then picking up on celeb’s in the crowd and focusing his cameras on them to speak with. First up it was lil Tinchy Stryder who had his stunners on all throughout the show-very unnecessary but I understand that artists become very insecure as they get bigger and eye contact with us mere commoners isn’t desired. Tinchy was challenged to speak Ghanaian. Also in the crowd was the ultra articulate Chipmunk who for once sounded shy as Eddie bantered about using ‘’Chip diddy chip’’ as a nursery rhyme. Eddie swore blind to me that none of the acts knew he would be focusing so closely on them!  Kano was teased about his footie career which Eddie stated couldn’t have been very good forcing him into music! And he joked that Kano needed to learn the whole alphabet not just his P’s and Q’s. Mclean meanwhile looked really nervous.
Lethal B laughed hard as Eddie performed his own version of ‘’Pow’’. A running theme through out the show was that Eddie had written most of the artists hit songs and not been repaid for his input.
Next Eddie donned a Dappy-esque hat and N Dubz members Fazer and Tulisa joined him onstage- Dappy was unavailable as he was with family in Greece. Eddie played on the joke that he could be part of the band and take Dappys place with a few well thrown in ‘’Na na nai’s’’. Eddie told me later that they hadn’t rehearsed the set with Fazer and Tulisa which was very good if it was really all free styled.
Eddie also had Nigerian personality ‘’Vocal Slender’’ who appeared on BBC2’s ‘’Welcome to Lagos’, and paid for him to fly him to London…
A lot of celebs had all turned out to support Eddie from Radio 1’s Reg Yates ,Chucky Venice the actor, DJ Abrantee, Su Elise, Billy from Eastenders, footballers, Eastenders actor Rudolf walker and female boxing star Lesley Sackey proving just how liked Eddie is by the scene.
The finale showed 4 times MOBO 2010 nominee Tinnie Tempah who sounded strong and fearless performing his smash hit  ‘’Pass out’’ in his dynamic as ever way.
Eddie revealed post show that his favourite part of the night was performing the medley of comedy songs the most.
Next on this go getters to-do-list he tells me confidently is ‘’Chasing TV, presenting and combining his comedy genius with TV’’. Watch him fly! (but not via AIR KENYA whom he has issues with!-you had to be there LOL!)