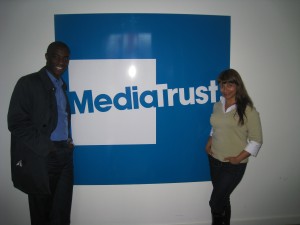 What a week of fabulosity in London town! Firstly Alicia keys and her hubby Swiss Beats flew in. Swiss threw an intimate dinner for a few movers and shakers and Alicia hosted her KEEP A CHILD ALIVE BALL at the round house in Camden where many wealthy folk attended as did a few music acts like Tinie Tempah who dueted onstage with the great lady herself on ‘’Written in the stars’’ (during which Tinie just kept looking at her singing his song with amazement on his face that this was actually happening. Alicia turned up clutched her mans hand tightly-they looked so loved up- she was wearing a long boob tube sheath dress with a pile of black feather plumage on the bottom and looked stunning! (the DOLCE & GABANNA celeb team Chandni and Ruth had done well!).
Chipmunk looked really relaxed and laughed all night wearing his leather jacket. His mate Wetch32 looked sweet in a suit and tie, comic and DJ Eddie Kadi looked sharp in his tux, Beth Ditto in platform wedges and a black knee length dress and Mark Ronson in his black tux (and white conversed foot!) were mostly formal in frock and suited and booted too. Ms Dynamite wore a tight corseted black knee length frock which showed off her lithe figure beautifully.
George Michael was the big draw of the night and was supposed to sing his hit ‘’Freedom’’ with Alicia. Alas he didn’t turn up due to what he described on twitter as a swollen hairy face due to toothache. Ironically the first liner of ‘’Freedom’’ is; ’’I wont let you down’’ oh how we laughed. Alicia trooped onwards though and it was all good. Anyone who’s been in the music business for years knows that George is notoriously shy and nervous doing live gigs so it wasn’t a great shock to many of us.
Another George did turn up–Boy George who gave a rendition of his hit ‘’do you really wanna hurt me’’ which was kitsch to say the least.
Alicia sung ‘’new York state of mind’’. Then an annoying woman who was probably drunk in crowd said she had something to say to Alicia who brought her up onstage (probably thinking she was going to donate millions), the woman kept telling Alicia that she needs to do a song for London and be a spokesperson for London before it became clear that her cheque book wasn’t involved in this conversation at all and it was onto the next thing.
Ultimately a great night for a great cause where somewhere along the line many children will benefit-good job Ms Keys!

Other faces making a change in society include THE APPRENTICE winner Tim Campbell who popped into MEDIA TRUST towers to meet and greet our LONDON 360 news reporters this week. They grilled him on his time at The Apprentice, working with Lord Alan Sugar, his Bright Ideas Trust, and his thoughts on literally anything. They grilled him good and proper for our LONDONER OF THE WEEK slot ,bless him poor guy. 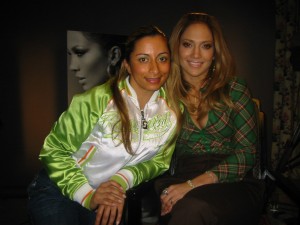 Capital Radio had their annual Capital Summertime Ball at Wembley Stadium. Yes –not the Arena-the Stadium and it was packed out full of 80,000 people!
I have to confess the turnout and level of the event was on another level. I’ve been to many radio road shows and one off events in the UK but this one was extremely well done from the turn out, to the screaming passionate listeners and fans, to the posters waving, the cheering and singing from the crowd, the friendly helpful staff at the stadium-it was pretty impressive!
I missed opening act JLS but was told they were gobbling up all the free sweeties backstage. They actually leapt into a helicopter straight their set to fly to Swansea for another show later that day! They did reveal backstage that they’ve finished their 3rd album though! In the ladies toilets I overheard a convo between a group of kids saying they thought J Lo was really pretty but they wanted a ‘’real a list superstar singer like Mariah’’ on the bill to blog about LOL. I had to agree-Ms Lopez lyp synced her whole set bless her pretty self. ‘’I’m into you, I’m into you’’
Wretch32 bumped into us in the lift. He looked like he’d had lots of fun onstage with his boy Example. The crowd jumped lots to their performance of Unorthodox. Cee-Lo rolled onstage wearing a huge, tick cream puffa jacket and sang ‘’Its Ok’’ to a very happily swaying crowd in the rain.
Jessie j was very regal sat on her throne as she had broken her ankle/foot so sang‘’Price Tag’’ seated but her fans were with her all the way and she didn’t lose anything by not being able to strut her usual sassy stuff.
J lo and Pussycat Doll Nicole Sherzinger tried to outdo each other with the number of costume changes they each had and the colour scheme for both was a flattering silver and black.
Pussycat doll and Lewis Hamilton’s beau Nicole was inundated with interviews and people were commenting how extremely thin she was but I reckon her extremely long straight black hair extensions may have elongated her body more. Capitals backstage described her as the most beautiful female on the line up. I practically felt the PR teams and managers of other females in attendance withering in irritation LOL. Nicole thanks her genes and ancestors for keeping her looking good. She did a bit of yoga and did some vocal exercises before getting onstage. Her beauty tip was a lot of moisturiser all the time.
Britain’s got talent dance group Flawless were backstage post set all in black leather jackets and red trousers and really milking the attention from the artist stand both from wag types in the stand and loads of little young kids who were begging for pictures and autographs- you had to smile.
Ne Yos set was as big if not bigger than you’d expect. Smoke bombs, fireworks and exploding crackers going off during his big songs like Beautiful Monster. The lighting was on another level, with style, colours, slickness-his set had it all. Even when the rain had saturated the stage a very casual unfazed Ne Yo moon walked across it spraying up splashes that looked on the giant screens like a scene from a very well shot video.
The VIP hospitality suite was crazy. Whoever hooked up the Capital suite deserves a promotion, pay rise and a Spa day at the Mondrian!. The number of external vendors giving away free Hot dogs, specifically made pizzas, pop corn, pick& mix sweets, candyfloss, loads of Starbucks, cakes, pastries and so much more just went on and on. It was like being in Charlie and the chocolate factory. My mate and I loaded ourselves up with as much free stuff we could eat, carry, take home and went to check out our boy Ne Yo the headliner.
I noted a set of funny tweets between other radio stations when they said ‘’call the lawyers-Capital are claiming they broke Wretch32 and Katy B’’. Which actually did make me laugh as I recall when Capital hardly played any urban influenced Brit acts at all.
The Green room was constantly a buzz with photographers and talent conducting interviews and grabbing quick beverages as they ran from one stage set up to another backstage interview.
The capital A LISTY GOODIE BAG contained ….are you ready for this list of product placement heaven?…- The Big Yum Chocolate covered pretzels – Starbucks Frappuccino® Gift card – Krispy Kremes, Box of 12 donuts – BaByliss Wave Envy Hair curlers to create beachy waves – BaByliss i-stubble Beard trimmer – tocontrol stubble – CKone fragrance collection Fragrances and toiletries- Champneys Voucher for a weekend spa break – Caudalie Pulpe Vitaminée Smoothing Serum  – 1st wrinkle face serum Stri-Vectin-SD Eye Concentrate- Wingman Deodorising wipes for men – Kings of London (Shower gel and hair gel for men) – Onitsuka Tiger Trainers (Trainers for men and women) – Guess watches    Watches for men and women- St Moriz Tanning Tanning lotion and bronzer- Esme Jewellery Necklace that has perfume inside – Zara Taylor Jewellery    Jewel ring and necklaces with clocks in – Calvin Klein Underwear for men and women – LEGO® minifigures minifigures including pirates, Robin Hood, clowns and cheerleaders – Butterfly Twists – Folding pumps for women – Trevor Sorbie Dry Shampoo- Queen of…Razors and shaving gel – King of Shaves Razors and shaving gel. IM BREATHLESS JUST READING THAT!