The key influencers and movers and shakers of the music industry were out in full force last night for the annual adidas summer hip-hop karaoke summer party, this time in conjunction with DJ Target, celebrating adidas classics.
(MORE EXCLUSIVE PICS FROM THE NIGHT COMING LATER ODAY!-KEEP CHECKING!)

Held at the West London Chelsea football club location -Under the Bridge (Stamford Bridge) nightclub, the venue was packed and heaving with ballers and b girls by 8pm, and people were throwing names on the list to grab the mic later in the night and show-off their verbal flow skills.

The walls around the venue were dramatic with hundreds of huge,framed and mounted pieces of artwork showcasing both British and international actsover the years who Adidas have supported rocked their fly-ass 3-stripe looks.(and make no mistake, acts that get clothing brand support at this level can get global profile in fashion campaigns and this catapaults their music profile’s higher!). 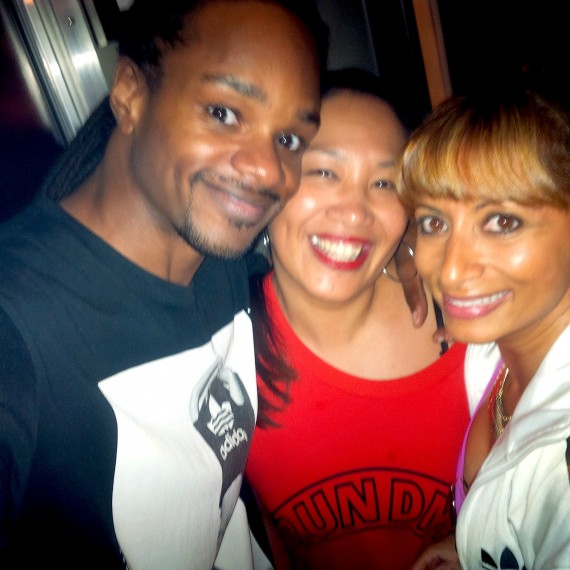 The party pack looked like the best Adidas ad shoot ever, all rocking their three stripe classics, and I have to say….and I will let Wretch finish his moment on the mic,…. but I reckon I rocked my look hardest.

In an especially bespoke fresh to death white tracksuit, with blinged out sleeves, and monogrammed initialled bling on the reverse, I lost count of the number of compliments and photos our matching tracksuits received. 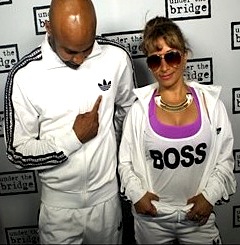 A giant photo booth that fitted up to six people, captured all the frolics, and had us all acting out our hip-hop star fantasies with passion lol.

These regular three stripe functions always bring out a very cool happy hip-hop family crowd and this night was no different. Talent that are all ages either Adidas sponsored or recognise its long history of supporting black music culture, from music, TV and sports all mingle and get their thrill of trying each others day jobs out.

Olympic athlete Jeanette Kwakye is not afraid of the track or the mic and on arrival stepped straight onstage to duet with her rhyming partner-musician Jacob Banks for a rendition of Drunk In Love. 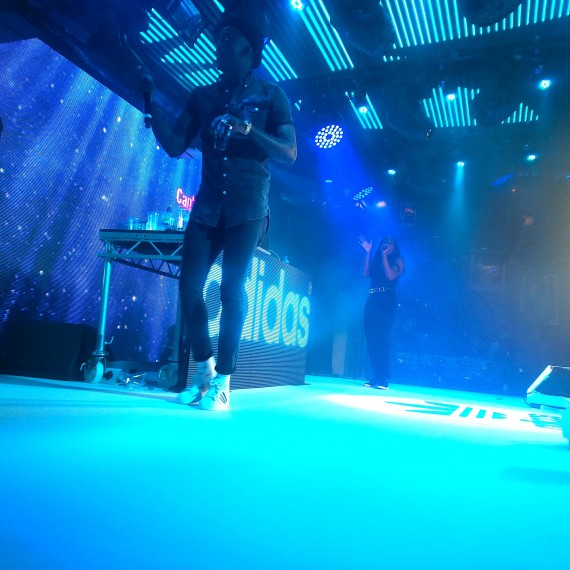 Jeanette and Jacob- athletics and music comes together!

Radio 1 Newsbeat’s reporter Nestor McGregor showed off the face behind the nations showbiz reporting voice, by being an early mic handler! 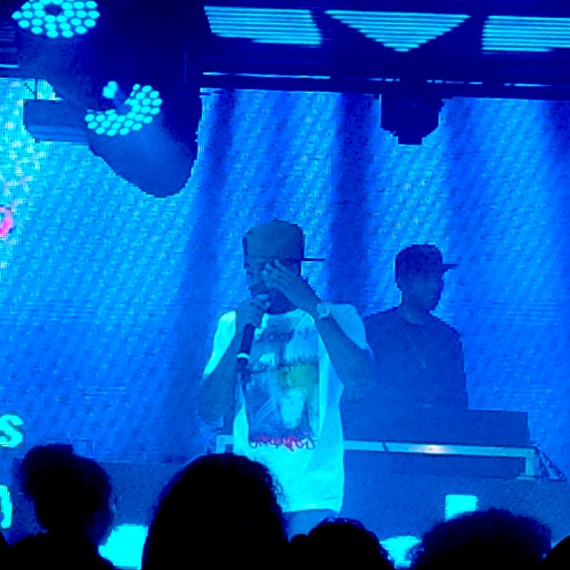 Another couple attempted Hov and Bey’s Bonnie and Clyde and Wretch32 jumped onstage to join in with the end of yet another group of friends who were doing a great job on his hit single Traktor.

Actor Jay Brown, fresh from his recent Channel 4 mini doc screening, physced himself up (with a lil pep talk from me,- to go kill Vanilla Ice’s Ice Ice Baby LOL. 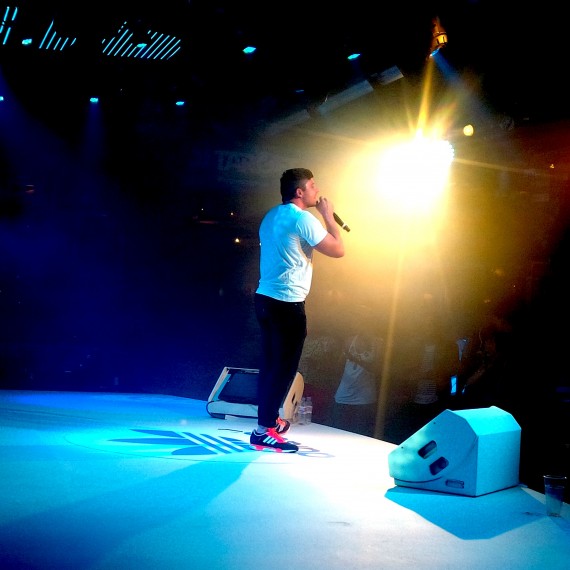 ACTOR JAY BROWN GETS DOWN WITH ICE ICE BABY!.

However, my favourite set of the night were the female Radio1/1Xtra female staff who took on, and smashed So Solid Crew’s 21 Seconds with menace and vigour. Spittng the lyrics as comfortably as if they were born reciting them, they had the whole room hyped and cheering alongside them. 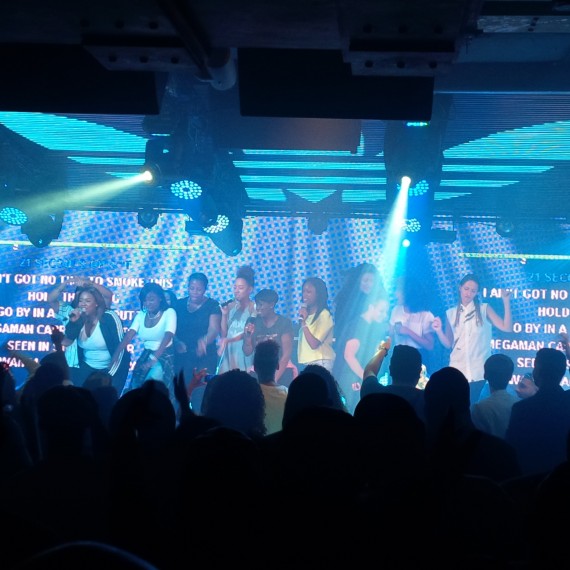 RADIO1XTRA/RADIO1 FEMALE STAFF SMASH 21 SECONDS- (HOW MUCH FUN MUST IT BE TO WORK WITH THEM!)

Other peeps that jumped onstage for their moment-included comedienne Miss London, media princess Remel London and their crew.

Compere Seani B put myself and Adidas brand leader Paola Lucktung on blast a few times, by urging us to take the mic, but after my horrific experience a few years ago at a ChoiceFM function where I couldn’t name the tune after the intro 5 seconds being played and being heckled, I decided to play it safe and not expose to all, the fact that I am tone deaf and couldn’t sing to save my life! 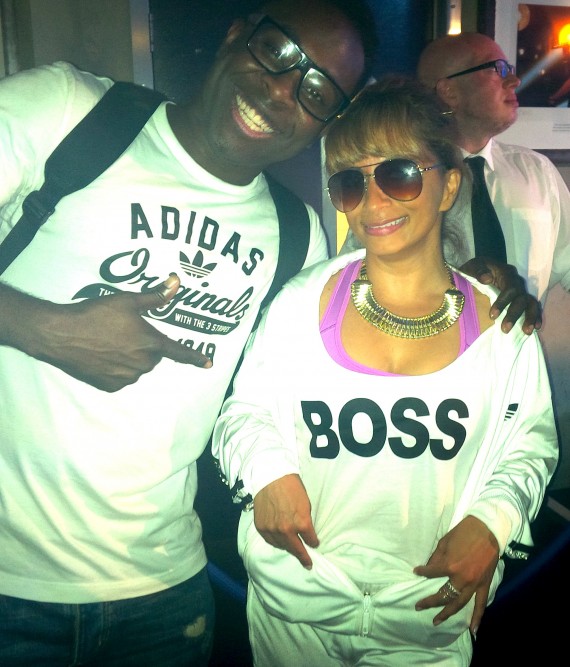 Nearer the end of the night a merry gent picked me up and carried me to the stage in a fireman’s lift, and dropped me on it, to encourage my usual show-off tactics, but alas in room full of my peers, I know when to hold it down and politely declined.

If it’s a business social function, however merry and intimate the crowd is, you have to maintain a status of professionalism. In a parallel universe it’s the same advice as Biggie gave when he said ‘never get high on your own supply’.