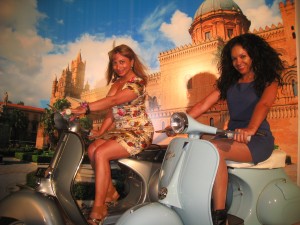 I was lucky enough to attend a very lush soirée. The invitation read ‘’Natalie Massenet and Jeremy Langmead invite you to join Domenico Dolce and Stefano Gabbana to celebrate the arrival of Dolce&Gabbana at Net-a-Porter and Mr Porter, at home at The Village offices in Westfield. That’s strange I thought. ‘‘A party in an office in Westfield? How unsexy. How wrong could I have been? I took my mate MOBO CEO Kanya King with me as my guest and we had a quick dinner in the open food court in Westfields before searching for the ‘’Office’’. We were directed to the top floor to a pair of sliding glass doors. Once past thosedoors was a hidden short, fast elevator that transported us to a top floor that the general public would never have seen and was a massive expanse of black and white monochrome sexiness. Black plush carpets, white walls, monochrome artdeco furniture, bars where we sipped martini gold cocktails, a room with an Italian Sicily set up with Vespa bikes where we were encouraged to pose in front of a wind machine fan (and Kanya and I took full advantage of that)…it was total and utter sexy Italian fun-very Dolce!. All kinds of royalty were in the house from Kanya KING, to QUEEN Laitifah and stylist PRINCE Richard Shoyemi, who had arrived dressed as an Indian prince!. Queen Latifah chose to wear adolce black tuxedo, white shirt and a gold chain necklace for her appearance; When Queen Latifah arrived the guests all took a sharp intake of breath at her glamzonian beauty as dolce celeb PR girl Ruth dragged her through the crowd. 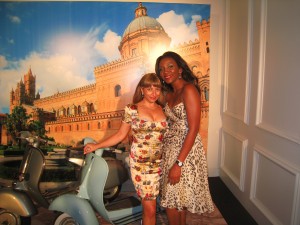 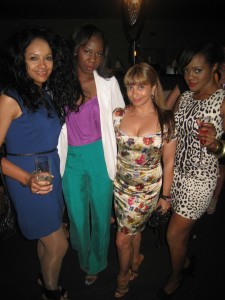 My London 360 TEAM went along to ‘Intelligent Movement: A Celebration of Hip Hop’ at the Southbank Centre last week to catch up with some of the original pioneers about the four pillars of hip hop culture and to assess how it continues to influence the community in the capital. The event was a culmination of DJ’ing, MC’ing, Breaking and Graffiti and featured a host ofevents by some of London’s leading hip hop collectives as well as crowd-pleasing international performers.We were particularly interested in looking at how this event catered to the array of musicians, poets and artists known for using hip hop as a platform to culturally and politically engage and educate their fans. Over the four-day event, London 360 heard opinions from the likes of Akala, Kate Tempest, Poetic Pilgrimage, The Peoples Army, Manny Norte, Charlie Dark, The En4orcers and primary school rap collective Power To The Pupils. MOBO award-winning UK hip-hop artist, revolutionary thinker,and my mate Akala kicked off proceedings with an animated talk which examined hip-hop and the traditional art of rapping, taking us as far back as the Medieval Malian empire. His provocative opening debate highlighted hip-hop’s cultural roots and questioned many modern-day representations, which contradicts its heritage. Most poignantly referencing some of the leading urban talent in the UK (Professor Green / Maverick Sabre) asking them to be more responsible when representing black people in their art. What followed was a successful ruffling of feathers which led to a fiery, passionate exchange by the artists on twitter.
Later that evening, the Purcell Room hosted the RAP party, presented by DJ Charlie Dark it was a celebration of Rhythm And Poetry and featured some of the best hip hop inspired poems I have ever heard. The line up was immense and the auditorium heaving. Featuring favourites such as Kate Tempest, each poet took to the stage, fully embracing the gravity of hip hop finally being recognised and celebrated by such a venue as the Southbank Centre and delivered their poignant hip-hop related poems followed by their two favourite hip hop tracks of all time. This was a unique music experience that treated hip hop fans and poetry lovers alike to some of thebest lyrics, bass licks and beats hip hop has ever been responsible for giving to the music world. A great event-we must make this a regular on the annualLondon calendar!

To finish the week I held a girlie pyjama party at my crib. We are eternally 12 years old as one of my mates once famously quoted. And then on Sunday night I drove up to London’s dance epicenter-Sadlers Wells which had been taken over by hundreds of young kids imitating pirates, fairies in  ‘’Step into dance’’.The Step Live showcase celebrated the achievement of pupils from the Step into Dance programme, which is a partnership between the Jack Petchey foundation and the Royal Academy of Dance. The night featured over 400 dancers from 26 schools including special needs schools  Walking into the Sadlers Wells reception, attendees were immediately bombarded by body poppers and break-dancers. Parents watched the talented hip-hop battles in amazement. Pupils between 11-18 years old we spoke to said dance filled them with confidence and that they found it much more fulfilling than watching television. Later On stage were contemporary, ballet dancers and body poppers in a Variety of costumes- an enchanting evening!

Now I’m off to write scripts for the team filming at the reggae festival of the year-the One love peace festival at Wembley Arena on Sunday 31st July where the line up includes; shaggy, sean paul, ky mani marley, gyptian, john holt, aswad, busta rhymes, sandra cross, levi roots, natty king, etana , skepta and more. As I caught up with Sean Paul before he flew into town he told me “I’m really looking forward to the One Love concert and performing for my UK fans…i know its been a long time and I’m anxious to show them what I’ve been up to”. Then my old pal Shaggy reached out to state  “I’m really looking forward to performing for my British fans, feels like I’ve been away from the UK for so long. Can not wait to bring Summer In Kingston to that stage!”Tony Gadd, From Aswad said: “We are thrilled to be a part of this phenomenal event. For us it is particularly special, remembering the late great Bob Marley, someone who we consider to have been a real godfather to us. London is our home so being a part of a movement to positively influence our young people through the ‘put down your guns and knife’ initiative will be an honour”. Promoter, Omari Ricketts  concluded ‘’As we mark the 30th anniversary of the death of Reggae Icon Bob Marley, the sentiments extolled through his One Love message are precisely what we want to convey through the One Love Peace Festival and being mindful of the state of our community as we watch our young people die on our streets, we want to use the powerful medium of music to educate and unite the world.”  . See you all down there!