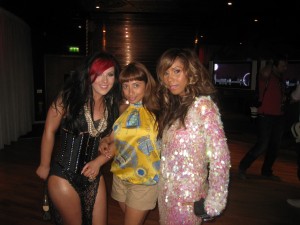 Aisha Stuart and Louise Bagan, are 2 musically talented young ladies that go by the name Addictive.i spotted them at controversial blogger Perez Hilton’s recent party at the 02 and noted that they were the only act to have the paparazzi excited with their Richard shoyemi styled outfits and swag. The girls have already tasted success thanks to a massive club hit, the T2-producedbassline masterpiece ‘Gonna Be Mine’. They’ve also had success on MTV DANCE and MTV BASE as well as in the BBC1 radio dance chart. Not bad going for two girls from East London. They first met as children ten years ago, through Louise’s cousin, but it wasn’t until one fateful Christmas in 2005 at an open mic night that the girl’s realised their shared ambitions. “I went up to the mic and started singing Silent Night, the Mariah Carey version,” laughs Louise. “Aisha was there, and ‘cos we knew each other I invited her up onstage to join me. We just started vibing off each other. Everyone assumed we were a group already – so we decided to give it a go.”
Both girls had years of singing behind them, honing their musical talents in gospel choirs and talent shows which included Louise beating Leona Lewis to 1st prize in an East London singing competition but it was only when they formed Addictive that everything seemed to click. “We could write music individually, but we worked better as a duo,” explains Aisha. “It fell into place. We had the same goals, had had similar experiences and we were both really serious.”
The ladies recently invited me down to the release party for their Mix CD ‘They Wonna Wife Me’ – a welcome breakthrough after their years of hard work. “We killed ourselves trying to get things done,” laughs Louise, “but it’s all been worth it. We’re so proud of the work we are doing worked hence the amount of effort we put in. World domination is next – we want an Addictive perfume and clothes range!” You heard it here first – It’s all go in the Addictive world -get ready to be addicted to Addictive.

Whitney’s right hand in Europe and my friend, PR maven Vanessa Amadi threw her birthday drinks at Soho Hotel . The hotel even gave her their private bar room at no cost cos they know they should keep this powerful media honey on their good side. On entry the barman was pouring rose Armand De Brignac champagne for us all,which I’m told is currently the worlds number 1 brand. Other industry players like newspaper editor and one time VOICE ex staffer Eva Simpson passed through, as well as Radio One DJ Reg Yates, MOBO founder Kanya King, KISS100FM DJ Manny Norte, Ex Sugababe Keisha Buchanan, and artist Chocolate Doll AKA Nay Nay. There were 2 huge cakes. I tried to feed one that looked like it may contain walnuts to a man with a peanut allergy to ‘’see if it really works’’ but was held back. Instead I wrote a message to the sophisticated Vanessa on her huge white canvas board and stuck a Polaroid of us next to it. Good times!

Its very exciting that finally African music seems to be about to have its big about to blow moment. International acts have been collaborating with African artists for years and many European countries like France have huge African music festivals like Africa Express so it’s a little strange that the UK has for once been the last to catch on instead of at its usual forefront status of trend setter. The 3rd annual African Music Awards takes place at Wembley Arena this October 15th and the launch party was held at Covent Gardens Africa Centre where champagne, wine, nibbles and t shirts were handed out to a sparse crowd that were a little weary of the late start but their passion and belief in the focus of the event kept guests like entrepreneur Alexander Amosu, ChoiceFM DJ Abrantee, old Big Brother contestant Aisleene, founder of Colour Blind Cards Jessica Huie, and many more in the venue to watch Chocolate Doll and MC Sway do their thing onstage as founders of the AMA’s Eric and Nick told the attendees a little about it. I alas had to run about 10 minutes after it began as I had a date with Pharrell Williams.

Well I say a date. What I meant was I had been invited to an exclusive listening party in a store in Shoreditch to hear NERDs new album ‘’Nothing’’. When I jumped out of the black cab with my MTV and Channel 4 buddies we were a little intimidated by the hardcore looking guest list bulldog on the door but luckily our faces seemed to be our tickets in, so we were ushered in with her muttering to the security ‘’ok these are the last 6 allowed in-we are at capacity!’’.
Inside the brightly lit, sparse clothes store was filled with uber trendy fashion heads wearing mis matched, bright, ill-fitting garms in the way that only north London trendys can do. I bantered with RWD magazine top lady Hattie Collins and her crew who impressed me by being out the night after their own massive RWD bash after which they hadn’t slept all night.
NERD man Shae was walking and working the crowd speaking to all and sundry in that relaxed, non-diva manner that he has. We reminisced about old days when we were all running around New York and Cape Town and recalling unprintable stories. Pharrell of course was working his profile like only Skateboard P could rocking Billionaire Boys Club camouflage clothing and stunner shades. The crowd was ultra cool and not one person asked him for a photo or screamed at him groupie style. A really nice vibe. The last time I was in his vicinity it was like the Beatles and Justin Timberlake had just walked out together!. Pharrell talked us through each track on the new album and played at least 50% of most of them. I really liked ‘’Perfect Defect’’ and ‘’Victory’’ whilst ‘’Help me’’ was a very slow down tempo song that I felt could only work if you were very high and chilled. But in all honesty it was so busy in the room and so many people talking you couldn’t really appreciate the sound except to note that the new material sounded very similar to the NERD we know and love and no doubt there will be thousands of skateboard types putting yet more cash into the NERD trios pockets once NOTHING is released. It was way too hot and sweaty for us in the room though and the strange outfits surrounding me were starting to break me out into an imagined rash so we stepped out and went for a late night curry instead.
Enjoy your bank holiday weekends and make the most of your free time! (in my spare moments I like to add to my CV and think about what else I can add to it-life’s too short to spend 3 whole days at carnival worrying about where to go to the toilet!).