‎So Bend it like Beckham is the feel-good new modern British musical which has been doing really well in London’s West end this past few weeks, with its now familiar story of a two sisters (Jess and Pinky), living in a family in Southall Broadway, the buzzing hubbub of Asian families socializing, shopping and gossiping about each other, all set amongst the backdrop of Asian store brands like Royal Sweets, Sagoos, Madhus. Southall Discount Tyres and more. 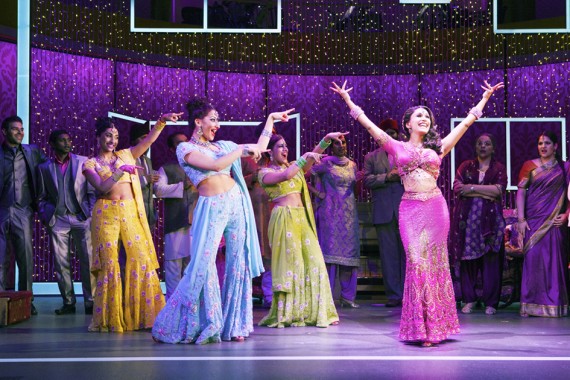 BEND IT LIKE BECKHAM AT THE PHOENIX THEATRE, LONDON.
Photo Copyright – Ellie Kurtz.

Jess needs extra time. She is facing the most important decision of her life: live up to family expectations of university, career and marriage, or follow in the footsteps of her hero David Beckham. When the talented teenager is spotted playing football in Southall, a world of unexpected opportunities opens up before her. But as her sister Pinky’s traditional Indian wedding approaches, can she keep her family happy and still follow her dreams? 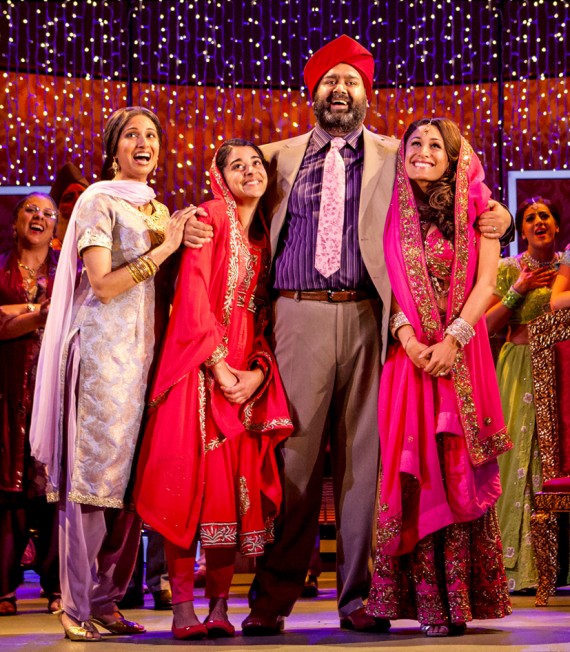 Jokes about Asian females hairy lip lines, whole houses ablaze with twinkling fairy lights for weddings, passions for mani-pedi, facials and boyfriends reign…unless you are young Jess who adores the sport of football and alongside her footie best pal Jules, has to lie to her family in order to join in with the local Hounslow Harriers ladies football club.

It’s a perfect musical for all the family, especially if you love football; like the footie version of Westside story but with big song and dance musical numbers sung in an Indian accent, like the infectious “girl perfect”. The live band on the balcony juxtaposed with the catchy songs sprinkled throughout will have you bopping in your seats all night. 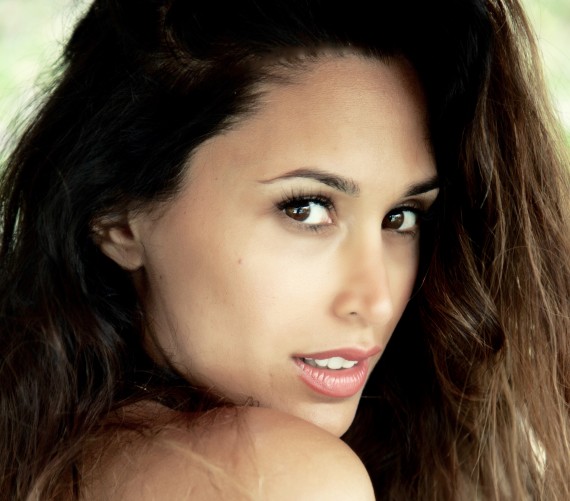 Most impressive is the massive powerhouse voice hiding inside the petite body of actress and singer Preeya Kalidas, who often stole the show as she belted out songs and danced up a storm.

‎In amongst all the Indian clichés, issues and jokes about fair skin vs darker skin ‘’look how dark you’ve become’’, Indian mothers emphasis on teaching their daughters to cook and ‘’not being seen outdoors with any old man’’, were more touching, deeply sensitive issues about the generations born abroad and born here just not understanding each other. ‎There were even nods to indigenous white families not understanding each other’s lives, ambitions and values anymore. It was particularly poignant watching and relating to the struggle between young peoples dreams and their ‘duty’. 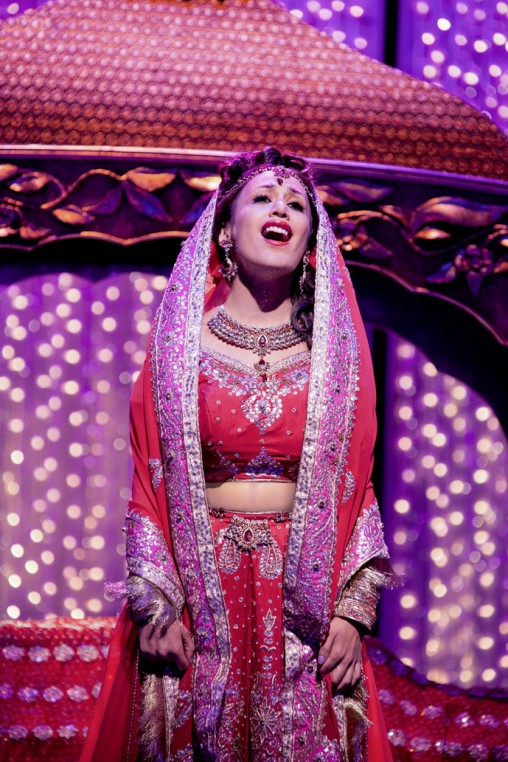 After the show, I caught up with Preeya in her dressing room for a chat, and asked her how she thinks Indian themed musicals making more of their mark on the west end stage have faired recently?

Preeya; (the fact that they’re) Indian themed musicals, is what sets them apart from any other show, and makes for an interesting cultural fusion, particularly musically, which audiences seem to really love and enjoy. 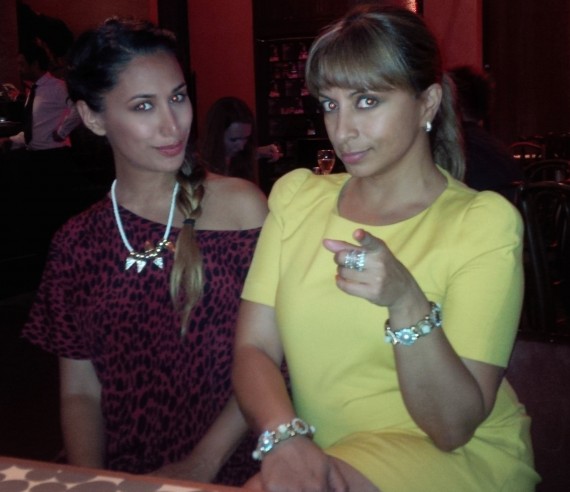 Jasmine; You played a different role in the film/ musical- tell us about that?
Preeya; I played the role of Monica, the cousin of football mad Jess. Monica is your typical Asian west London type who actually wants to be Pinky, Jess’s sister, the role of which I am playing now.

Jasmine; BILB is based in Southall – it’s managed to stay respectful and funny instead of offensive and stereotypical- was that important to you all?
Preeya; Absolutely. I strive to be part of projects that represent our community in a positive light and not to focus on the one-dimensional aspect. Bend it like Beckham has all the right ingredients that audiences can relate like cultural conflicts of generations portrayed in a realistic manner that will make you laugh, but also make you recognise the experiences.

Jasmine; Tell us about your role-playing Pinky- and explain the nickname Pinky to those unfamiliar with Asian culture?
Preeya; Pinky is the complete opposite of tomboy Jess who dreams of playing football, whereas Pinky dreams of getting married and having the perfect family setup. She is a fun loving energetic, juicy couture wearing, typical Southall girl. Her name Pinky is actually a typical Panjabi name meaning Most Beautiful; Pink Coloured; Sweet; but having also discussed this with Gurinder Chadha – our director – her real name is probably something like Paramdeep, but its typical to have such names shortened …and also the fact that she loves wearing pink!

Jasmine; Even though you don’t play the main lead role, you’ve managed to steal the limelight in the musical, how have you managed to shine – but not too much?
Preeya; Ah thank you for your kind words! I have had a wonderful time re creating the character for the musical and Pinky is a great character to play, I just thoroughly enjoy myself on stage and its refreshing for me to get the opportunity to do comedy, sing, dance and act all in one production!

Jasmine; What kind of statement do you think the success of this musical has had on the west end and on an Asian cast?
Preeya; The last successful west end musical with a British Asian cast was AR Rahman’s Bombay Dreams, produced by Andrew Lloyd Webber, which I had the wonderful opportunity to play the lead in. It was groundbreaking and of its time for many reasons; one being the fact it represented the Asian community and gave us a voice. Bend it like Beckham is now doing the same thing but representitive of the British Asian community (Bombay dreams was set in India).
TV, Film and Stage are fantastic outlets to change perceptions of ethnic communities and it is important that there are more opportunities for this to happen. Gurinder Chadha is a real pioneer of representing the Asian community to a mainstream audience. She lets them into a world that they may not know but in actual fact will find that they can completely relate. I suppose that’s why Bend it Like Beckham is so special, for that reason.

Jasmine; How difficult is it securing roles that aren’t focused around your ethnicity and how engaged do you get in all the industry ‘diversity’ conversations?
Preeya; I have been lucky in that I have played roles that aren’t specific in ethnicity, there are certain casting directors and producers who are open minded and will focus on talent, which is fantastic, but there is still a long way to go. I also love playing roles that represent my community, as long as they are interesting stories and not one-dimensional characters. I engage in ‘diversity” conversations with my peers as there is a lot of frustrated talent out there. We can talk as much as we want, but action would be more conducive, I say lets get writing and tell the stories we want to tell!

Jasmine; What’s your biggest challenge as ‘Preeya Kalidas’ in the showbiz world?
Preeya; I think anyone that steps foot into this industry will face a number of challenges. Being put in a box is a big problem in the entertainment biz, but for me I strive to stay out of the box, which is why I have managed to have a diverse career in film, TV and stage.

Jasmine; What one thing do you want people to know that might surprise them about you?
Preeya; I cook???!!! Tasty meals…ha!

Jasmine; You’ve always juggled both acting and music equally – tell us about that journey now in 2015? How easy / difficult is it? Is this genre your perfect career fit?
Preeya; It’s down to you to keep pushing and find people who believe in what you do and can do, that’s the task. It’s a perfect fit for now but who knows what the future holds.

Jasmine; Any other separate music and acting updates we can expect from you in the future?
Preeya; There is always something Kooking in the Kalidas world, I am on a constant creative journey. Follow me on twitter and you can keep up to date @PREEYAKALIDAS 😉
(OMG she’s gone all K K K K Kardashian!). 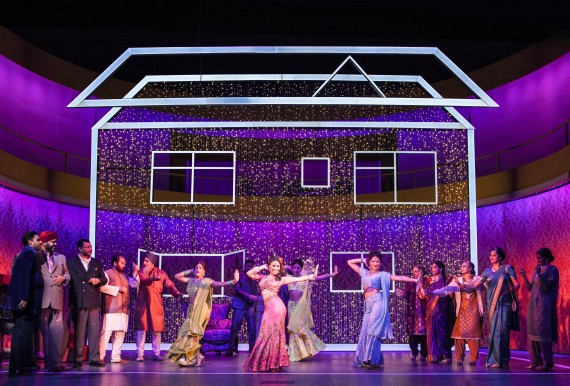 Bend It Like Beckham is a celebratory fusion of culture, music, emotions and fun, bursting with warmth, humour and heart and is at the Phoenix Theatre in London. Bookings from now until October.