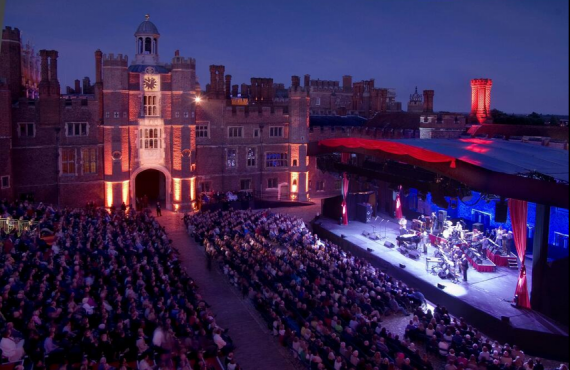 THE STAGE AT HAMPTON COURT PALACE FESTIVAL AT DUSK.

In recent years various arts genres have been merging, making for incredible one off experiences. Whether it’s free running at 10 Downing Street, hip hop at the Turner Rooms at Tate Britain or film and live music performances of their soundtracks at the Royal Albert Hall, I am a huge fan of a cultural mash-up.

No longer do we need to settle for music performances at the traditional venues, and summertime means a plethora of outdoor music at prestigious venues, like the Royal Parks, World Heritage Sites, Historic Royal Palaces, Manchester United FC, Corporation of London and the Royal Botanic Gardens Kew.
However, these are very niche in their usual audience ‘posh concerts for the hamper set ‘ and those in the know, snap up tickets fast. So if you don’t know about these events you’ll miss out. So how it’s been going for 22 years and this is the first a die-hard music fan like me has heard of it I don’t know. I really need to up my game! 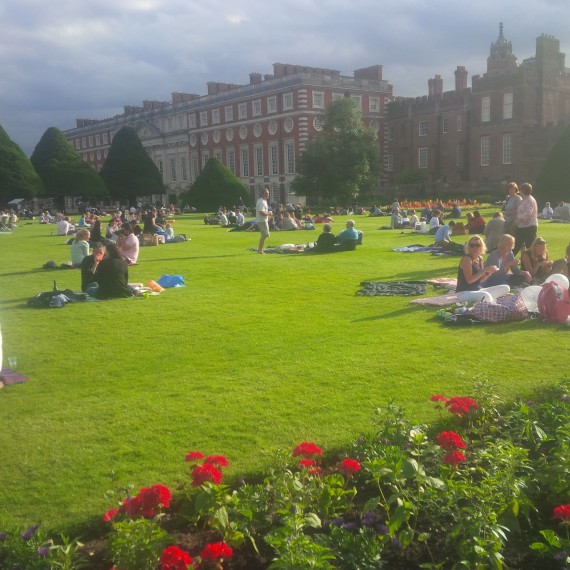 THE GARDEN LAWN WHERE YOU PICNIC PRIOR TO THE SHOW.

This year the festival runs from 11th – 25th June, and amongst the line up for this season are ten-time Grammy award-winner George Benson (who will performing hits like Give Me The Night, Lady Love Me (One More Time) and Turn Your Love Around on 23rd June – come on! the perfect date surely?), diva Dionne Warwick, The original boy band- The Beach Boys, legend Van Morrison & the most successful UK jazz artist ever Jamie Cullum. 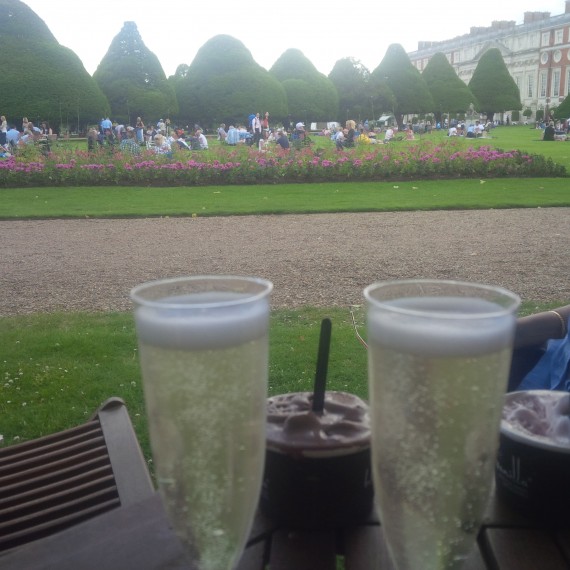 This past weekend I attended the classical gala and fireworks evening where The Royal Philharmonic Concert Orchestra performed a selection of well known pieces of music by masters of classical music like Strauss, Delibes, Debussy, Elgar, Tchaikovsky and more in Henry VIII’s open air courtyard.

We arrived at 5.30pm for our own meagre pre-packed supermarket special picnic and Proseco, which we bought, on site. Loads of what looked like VHNWI (Very High Net Worth Individuals) were merrymaking and supping champagne in the Palace Gardens before the concert started and time flew as we people watched. It’s a very bourgeois set up but the crowd came from all walks of life and it felt very inviting and inclusive. 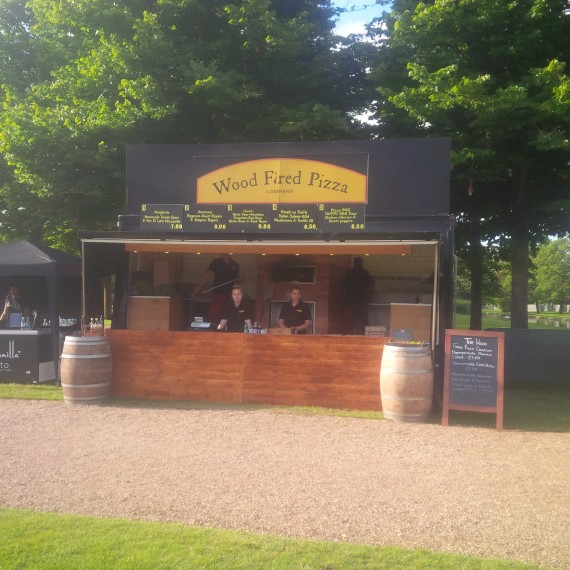 YOU CAN BUY WOOD FIRED PIZZA.

Whilst heritage parks may have a certain type of visiting demographic, adding a music element in the grounds opens up a whole new audience and visitor to the beauty of some of the greatest locations in the country. The tickets range between £40-£70 and during the show we were thanked for our support as all proceeds go towards the upkeep of the venue, giving these palaces a future as long and valuable as their past. When you consider that your average pop concert at the 02 and one off Prince tickets sell for hundreds nowadays, the festival package and experience for around seven hours finishing up with a fireworks display seems more than reasonable! 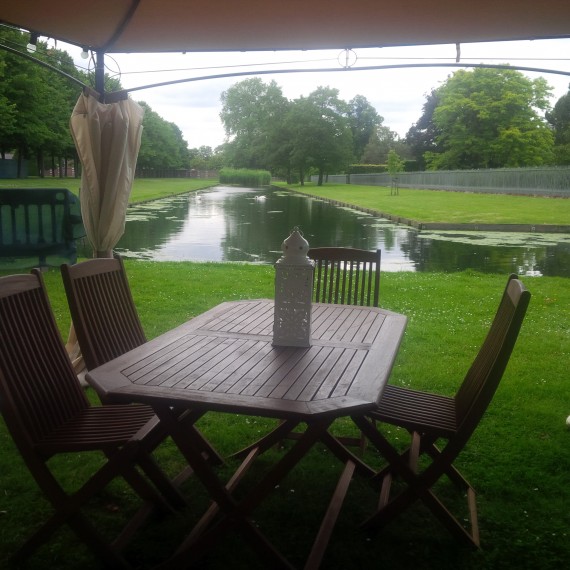 I noted that if you’re feeling really flush, you can book VIP Packages from £295 p/p, with dining inside the Palace prior to the concert and covered VIP seating, reserve a waterside gazebo table for a private group experience (£200), pre book a luxury picnic (£75), or simply bring your own picnic blanket and scatter yourselves across the immaculately preened lawns. The people-watching is first class! From the loved-up couples sharing a pre-packed picnic, to the families with young kids scarpering around, to the silver haired music fans sharing a bench, time flies when you’re ogling. 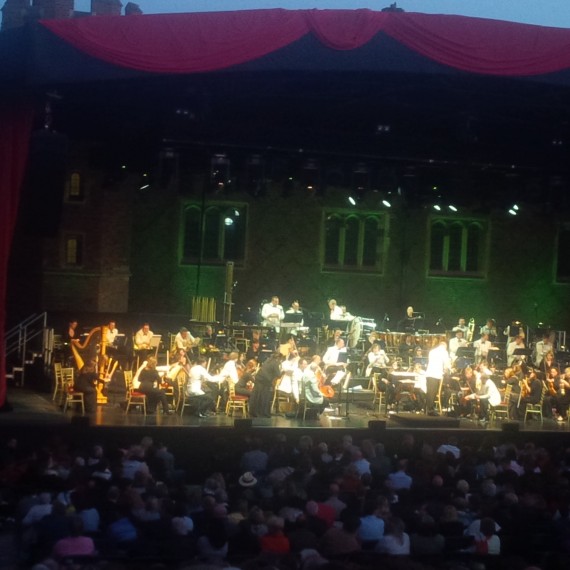 CONDUCTOR BEN DOES HIS THING.

The concert began at 8.30pm and was conducted by Conductor Ben Palmer, who shared wonderful anecdotes and stories about many of the pieces on the night and with his jovial, warm, engaging manner, the breathtakingly beautiful music was mesmerising.

I had initially been concerned at my ability to stay focused and not get bored as I’m so used to have some sort of spectacle performing alongside music gigs, (my friend says this means I’m uncultured LOL). It didn’t take me long to realise that the orchestra were spectacle enough. Just watching them at such close quarters is hypnotising as they work seamlessly together. The solo players catch your attention at every new bar, the flute player who jigs and bobs as he performs, the female drummer commanding our attention or the whole band bringing us to a crescendo! Nothing is rigid and audience walk in and out of the concert in between sets, as they need.

As soon as the concert finished the audience excitedly rushed back out to the main garden grounds to take their preferred spots for the fireworks display which began 20 minutes later. The fireworks were more quality than quantity and after a quick 15 minutes worth of spectacular colourful aerial displays, which provided a visual fanfare to round off this superb evening, we sauntered back to our cars. 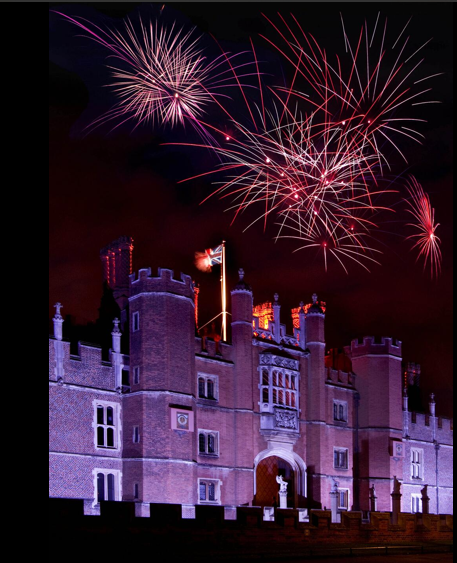 Hampton Court Festival really is a festival that offers everything – preshow outdoor picnic and drinks in a breath taking setting, a wonderful selection of stalls that sell wood fire pizza and snacks, a diverse line up of music acts, all set within a beautiful and historic setting and if you’re extra lucky – as we were- no rain!

On 20th June, pop sensations Rick Astley and Jason Donovan are performing a double-header singing all their big hits but readers, even though I like to think I’ve upped my cultural game I don’t think I could handle the cheese fest that is Rick and Jason. Not that it matters- the night sold out ages ago! I shouldn’t scoff. Rick Astley still holds the record of being the only male solo artist to have his first 8 singles reach the UK Top Ten and in 2008 he won Best Act Ever at the MTV Europe Music Awards.

If you still want to get involved this year it’s all sold out except for a few tickets available for Opera on a Midsummer’s Night on 21st June where the Royal Philharmonic Concert Orchestra will present a special midsummer concert conducted by Renato Balsadonna and featuring the beautiful voices of soprano Deborah Norman and rising star Noah Stewart.

The best music festivals aren’t necessarily the ones at the biggest concert halls, or at campsites over numerous unwashed days, in car parks or farms. Nor is it imperative to have the biggest musical names or huge lineup. Sometimes they can be a great classic music act, juxtaposed with an unusual location, a classy crowd and dining option. And where else in the world does fancy historic English gardens with an ancient historic setting and the chance to sing along to your favourite music virtuoso like we do? Hampton Court Palace Festival really is in a league of its own.

My experience was akin escaping to an enchanted garden back in yesteryear and being fed and watered for the best part of the day. An experience, which is like no other and involves dining, horticulture, history, music and fireworks. An adventurous music festival day out, but without any of the usual associated discomforts. If you’re going to do a music festival then this is the one to taste with all your senses.