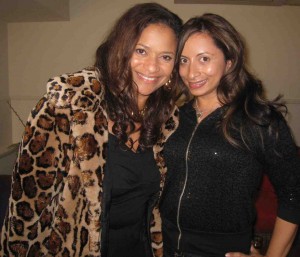 There’s nothing I hate more than a clashing of many fabulous events. One evening last week Naomi Campbell threw her Haiti charity show and party, MC and actor Bashy was holding a screening of his out this month movie shank, and MOBO founder and friend Kanya King invited me to join her as her guest to go and see the 100th theatre show performance of west end theatre production ‘’Cat on a Hot Tin Roof’’.

Kanya and I have known each other for years. Back when she was a TV researcher and I was a presenter on the Channel 4 iconic show THE WORD. Clearly our ambition was apparent from day 1 when we probably could only afford to grab coffee at Starbucks but ended up at the most expensive outdoor café on Portobello Road just so we could sit in the summer sunshine in our cute dresses next to model and flyest girl of her day-Veronica Webb who was at the next table with Spike Lee!.

Over the years Kanya and I have moved through the industry and caught up with each other over girlie dinners after late night meetings and edits.
We’ve collaborated on ideas, supported each other, fallen out for a minute more than once but our maturity and professionalism always has us talk it through and keep it moving *onto the next one.

We were well overdue our 2010 catch up so a few days ago Kanya called and asked if I’d like to accompany her for ‘’Cat on a hot tin roof’’ I was there.
But not before Bashy reassured me that I could miss his screening and come to the red carpet premiere this month instead, whilst (if I’m being real, and you know me, always got to preach the truth) – I couldn’t afford the £75 ticket for Naomi’s show and party- there’s a recession! , And I have a decade long love hate relationship with the fashion world so it was a clear-cut decision.

Also I had been meaning to try and see the theatre show from last year when my teenage heroine (Fame’s amazing dance teacher Miss Grant, otherwise known as Debbie Allen), had been in town with Mariah and told me to go watch it as she had directed the show. Well once I’d been forcibly removed from Debbie’s presence as I couldn’t stop clinging to her shrieking ‘’I love you, I wanted to be you, adopt me!’’ Debbie gave me her e mail details under duress and I promised her I would be going to see the show first chance I got.

The theatre was heaving with a very diverse audience when we arrived and we were immediately introduced to the shows producer Stephen C Byrd- a very sophisticated, elegantly dressed man who was a totally beautifully mannered charmer. Stephens currently the only African American producer on Broadway and kudos to him as ‘’Cat on a hot tin roof’’ was the biggest grossing play on Broadway in 2008!. So when we were ushered to our seats and I noticed we were sitting right next to the shows producers I was paranoid about the usual theatre worries. What if I fall asleep, what if I look bored, what if my phone rings even though I’ve turned it off, what if the mans head in front of me is so large I cant see. You get the idea.

Anyhoo, none of that worry was necessary as the play was intense and immediately intriguing. American actress Sanaa Lathan –daughter of movie man Stan was wonderful as the long-suffering wife of a once football commentator turned alcoholic. She had really long monologues but she dealt with them with easily and was unexpectedly funny too. All the male audience members were clearly drooling over her as she was not just gorgeous but was also just wearing a slinky slip all through the show. Our very own British actor Adrian Lester played the lead man and whilst his character barely spoke he did have an intensity that was mesmerising. Although it did jolt every now and then as his Mississippi plantation Deep South accent kept getting taken over by English which was a slight distraction. I thought I might have been imagining it until upstairs in the post show VIP drinks when others commented on it too confirming I wasn’t imagining it.

The other 2 actors I loved were of course the legend James Earl Jones who played Big Daddy. This mans voice has to be bottled for history. His was the voice of Star Wars Darth Vader! The Lion Kings Mufasa! Alex Haley in Roots! He’s won Tony’s, Emmy’s, Golden Globes, and a Grammy but my favourite thing is him reading the Bible! Yes, I found it very difficult to read the Bible as a kid until years ago when I first met Mariah she introduced me to the bible audio book read completely by James Earl Jones. His calming, strong, trusting, safe voice makes this the best gift!. He didn’t disappoint in the flesh either playing the old cancer stricken rich former slave. I was really looking forwards to seeing actress Phylicia Rashad-the legendary Mrs Claire Huxtable from the Cosby Show too. She was great as Big Mamma the sweet, classic black mother role many of us can relate to knowing.

The play was long-3 acts; it was very intense, mostly serious with odd lighthearted humorous spots of relief. The storyline was based around sibling rivalry; inheritance greed, parental antagonism and I learnt the meaning of the word ‘’mendacity’’.

The play was very very good. Post show in the bar there was a nice mix of journalists, paparazzi, actors, celebs and so on. Kanya and I talked about the play with radio host Vanessa Feltz, her guy Ben and her daughter. A few bitchy folk were slagging off poor Richard Blackwood who played a butler in the show and barely had 2 words to say. They couldn’t believe he had taken this as the next step in his career. I thought it was a good look as now he can add West End Theatre to his CV but they were not having it. A lovely big white iced cake was wheeled out and cut. You know I didn’t leave until I had at least 2 slices.
Straight afterwards the producers invited us to join them at the IVY club restaurant where at midnight we all had a lovely dinner with the whole restaurant to ourselves. The table of ten of us was a really nice group of power players that were really doing big things. Discussions revolved around private island ownerships, their private jets and so forth. I felt proud of them. A true sense of how much hard work must’ve gone into their lives. More power to them!
At 2am it was time for carriages as I watched them all jump into their private chauffeured cars, threw Kanya into a cab and hobbled into the underground car park to get my own car to drive myself home shaking my head at the surreal life I sometimes find myself surrounded by.
If you want to see ‘’Cat on a hot tin roof’ I’d thoroughly recommend it. In fact, a charity I whole heartedly support- the ACLT (AFRICAN CARIBBEAN LEUKAEMIA TRUST) is having a one off ACLT night show on March 15th. That will be great night full of faces we all know and love! What better excuse for a great night and a worthy cause. I salute you the cast of CAT ON A HOT TIN ROOF-BRAVO!