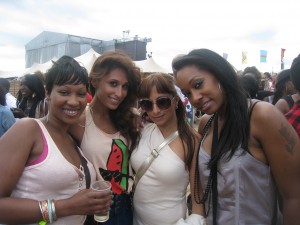 Every year for Black History Month myself and the MTV BASE team would go down to the very prestigious ‘’Black VIP 100’’ exhibition which marks the first decade of this millennium with a historic photographic record of black achievement in modern Britain annually and invites individuals to attend a Buffet Reception where during a very fun, buzzing afternoon a photographer takes am portrait of you that is included in a historical gallery showing for future prosperity. In the past our presenter Trevor nelson used to always film an annual episode of THE LICK at this event. So imagine my surprise when I was asked to be a part of such an esteemed line up for 2010. Well after thanking them for thinking of me I replied back asking ‘’um, did you mean to include me, you are aware I am of Asian African origin?’’. Dennis brown and Lorna Stewart replied back insisting that ‘’ We would be delighted to see you at the event. Just to confirm, the definition of black is anyone who is of Nubian descent, including people of mixed parentage. Nubian means people who, through the diaspora (slave trade), were displaced from their African origins and dispersed throughout the world- As an inspirational figure in the world of television and media, we would like to invite you to have your portrait taken by a professional photographer together with other achievers from the world of politics, sport, business, religion, media, entertainment, music, education, creative arts, and community support.’’ Well I’m not one to decline a fun afternoon so on Saturday we put on our finest to go mingle with other achievers in our community in a gorgeous manor house in Lewisham (yes-I ventured south of the river AND enjoyed it LOL) . After initial speeches, we feasted on traditional west Indian food and drinks and mingled amongst the portraits of VIPs from past years that are designed to inspire young people to excel and create a legacy for future generations, by highlighting our individual success and your valuable contributions to society. Portraits I spotted included my mate Mobo founder Kanya King, a range of VIPs, celebrities, well known personalities and members of the general public such as; Lenny Henry, Baroness Lola Young, Rudolph Walker, and many others. The Exhibition is visited by thousands annually and is supported by interactive workshops about black history, inspiring children and young people, and professional development for entrepreneurs. It has been heralded as a major success, with recognition on TV, radio and in print media and I urge you to visit it with friends and family to inspire and unite us all- a much needed reminder of our successes in the current climate!

Walking into the Wireless Festival last week was like a 360-degree turn around on British festivals of yesteryear. I remember in the nineties my street musician mates like Blak Twang, Ty, Rodney P, Roots Manuva and the Cookie Crew would just about get onto a festival line up by the skin of their teeth, and even then it was the smaller, alternative stages they were allowed to grace-and we were so delighted by their inclusion. Over the years with more respect and attention paid to young Brits like Lethal B who is an amazing live act, festivals have invited urban acts to dominate their line ups and wireless was another ‘’ we can exhale now’’ moment. This year saw UK urban acts out number American ones with the likes of Wiley and Roll Deep, Chipmunk (who really is becoming more and more superstar like with his stage presense as time goes by), Tinie Tempah (who swore quite a bit and took his top off at the end of his set!), Mz Bratt (who literally had her tent bouncing with excitement), Mclean (who was accompanied by his gorgeous daughter and wifey) and more! After queuing for our VIP Roc Nation passes (a celeb we all know and love refuses to queue for hers so someone else kindly queued for her!), we fought through the hundreds to get into the guest VIP area where we made a bee line for some food. Any food. We were starving. So we chose the food stall with no queue-the chip stall, where we paid a whopping £7.50 for fish & a few measly chips! Now we could see why the queue for the Jerk chicken went practically around the park. Everyone was still buzzing about the previous day where Missy Elliott had performed her typically awful live set after turning up mega late, as well as the humungous faux pas of wearing a Germany Adidas tracksuit onstage- mere days after Germany ran circles around us in the world cup leading to England being knocked out!. Oh dear. Was there really not one British colleague around to warn missy ‘’um that might not be the best idea’’? Add to that the fact that after fans began to boo her took off her shoe and gestured to throw it at them, which eventually led to organisers pull the plug on her set. Cringe. I know the industry says she gets very bad stage fright but come on son! A decade down the line she’s had a couple of afternoons to get a stage choreographer or trainer in to help her out surely!?? Record label top dogs like SonyBMG’s Nadir Contractor, Gordy Hagan and the man that made Destiny’s Child from a European point of view Mr Matt Ross were mingling with relative new comers KISSFM radio hosts Rickie & Melvin, singer Terri Walker, new up and coming girl group 3d, super producer Tim Blacksmith, boxer David Haye who as usual had girls lining up to take a photo with him, singer Mclean and many more. Beyonce was up in the tower watching her man do his thing onstage, she was joined by best female friend Gwyneth and other very big VIP names. Jay z was as charismatic as ever but I couldn’t heklp feeling at times he looked as if he was just going through the motions at yet another summer festival. All around us young ones were talking in hushed whispered tones about his alleged masons connection as I just rolled my eyes and laughed!.

Straight after Wireless we were invited by American southern soul chef, the celebrity cook Asbell who was throwing a July 4th celebration dinner for Americans in London at the private members club THE ELECTRIC. Ashbell is back in the UK to bring his southern soul food flava to the world of food. He has loved being in the UK and relishes bringing spice n all things nice to the table. Having produced a menu for Electric members he delighted chefs and customers with mouth-watering dishes. The great thing about southern regional food is it’s heritage is part Irish, Scottish, Native American, Spanish and African much like Ashbell McElveen whose family can be traced through all these lines and whose globe trotting has bought a wealth of recipes under his belt that know how to showcase this fusion of flavours. Ashbell is here to bring some life and soul to the palette. To help people remember through the fussiness of all the food TV overload that simple is best when you know what to do you can enjoy the experience of eating and sharing great food and most importantly in these times a style of enjoying great food that won’t break the bank. he is also producing some signature cocktails inc watermelon martini using his own forthcoming brand of White whiskey called Ashbells Moonshine, a clear mixable and delicious triple distilled corn whiskey – blended to an old family recipe…. Going to be launched soon in the UK. Cookery master classes soon come!

The next night Terri Walker performed a set for the iTunes festival at the uber plush members only club Shoreditch house which was full with fans and friends who came to support her including former Sugababe Keisha. Teri rocked studded Kurt Gieger shoes,a grown up blazer and sang her heart out and had the crowd eating out of her hand-look out for new music from her this year!.