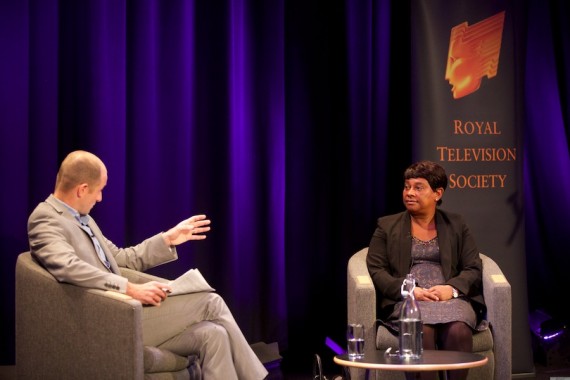 The joint Royal Television Society / BBC event ‘In Conversation With Baroness Doreen Lawrence: In The Eye Of a Media Storm’ was an in depth discussion with Baroness Lawrence exploring what lessons TV and the media should learn from her family’s story.
Held at the Radio Theatre at the BBC’s New Broadcasting House, It was presented by Mark Daly, the BBC reporter who revealed racism within the police in the documentary ‘The Undercover Policeman’ and has made documentaries on Stephen Lawrence. 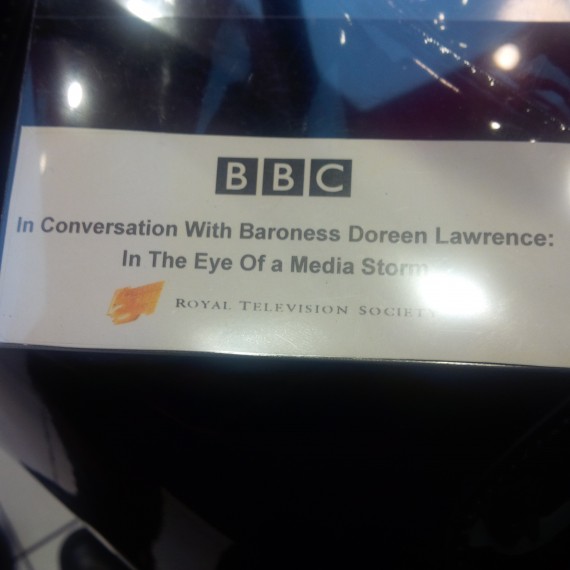 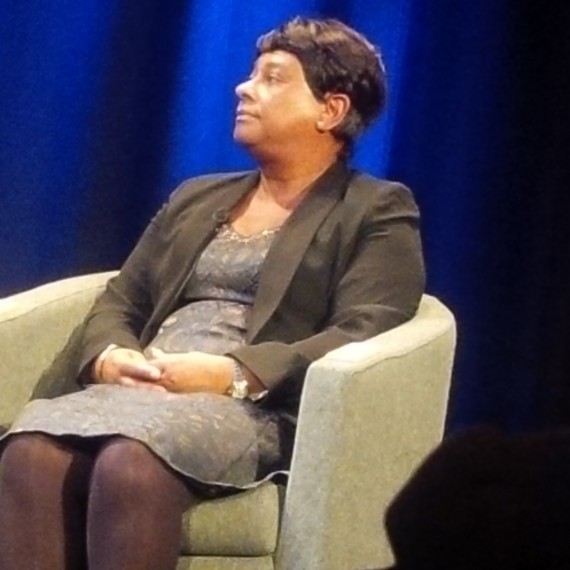 From the start the chat was lively with Doreen revealing that Daily Mail editor Paul Dacre only turned around to support her families fight for justice after he realised Stephens father/ Doreen’s husband Neville had done some building work at his home in the past. Doreen added that the early lies of the police were a blessing in disguise ‘’If that original police officer hadn’t lied I wouldn’t have been so angry to pursue justice and there may have never been an enquiry into my son’s death”. 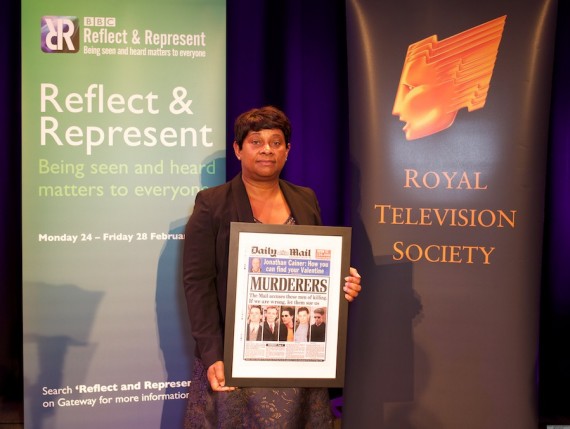 The same day of this conversation, the BBC were launching a new scheme with the Stephen Lawrence Trust to give 20 young BAME (black and minority ethnic) apprentices an opportunity into the media. “Its great but should’ve happened years ago” Doreen hit out. My own question is ‘would there be any real progression routes for these 20 apprentices or would they be flung back out a few months down the line?’ I guess time will tell.
There was one moment where I wanted to stand up and applaud as Baroness Lawrence emphasised that all the diversity quota initiatives weren’t working as she glanced around the theatre at the camera crews and stated “look around us here today…your cameramen here at the BBC today are all white-this doesn’t reflect our society make up fairly!”

Then presenter Mark started an area of questioning about Doreens relationship with her now estranged husband Neville, that a few of us found awkward and unnecessary. Doreen responded

‘’I’m not being disrespectful to Neville but people found it easier to talk to him back then than me because I asked the right questions and didn’t let them off the hook, he didn’t. My relationship with Neville is still very strained, but here’s still no one else in my life lol”.

To which Mark responded ‘’do you think that’s because some men might find you intimidating?’’ It took all my willpower not to jump up in protest!. I found this offensive. Does being a strong woman mean you’re intimidating? Or is it because she is a strong woman of colour? Would he have suggested a man was intimidating in the same situation?
A colleague and myself approached Mark post conversation to ask him about this and voice our displeasure. He stated that Doreen herself had suggested that maybe it was because men found her intimidating in one of their previous conversations. We informed him that then he should have put that in context to the audience, as it hadn’t come across positively. He accepted this.

Doreen did say that whilst the media get bashed about a lot (especially in recent years with the Levinson enquiry), that

‘‘the media played an important role in keeping the enquiry and our story alive. The corruption was deep in the Met at the time. I hate the attention and media as I’m a very private person but I do publicly what I do as I know I need to do it. I’d like to be a voice for people who don’t have a voice. In the House of Lords I will speak out about things that matter. Things haven’t improved since 20 years back. How can police get away with saying Mark Duggan was killed lawfully when he had no weapon? How was Joy Gardner killed with 15m meters of tape wrapped around her mouth?”

Pat Younge asked whether she felt the world was a safer place today for her grandchildren. “I question whether the worlds a safer place for my grand children. My granddaughter told another child that she wasn’t pleased with “its one of you who killed my uncle Stephen, that shocked me as we don’t want one of our children growing up with an unjust, incorrect sense of the world around them and had to sit her down explain that this was not how life was”.
After over two decades of campaigning Doreen admitted, “I am tired but if there’s a chance of seeing the rest of those men convicted I’d like to see it through- it was joint enterprise. And as long as I still have breath I will keep on fighting”.
A moving and personal story from a mother that has fought the fight of a gladiator to see justice done for her beloved son.
================================================================== 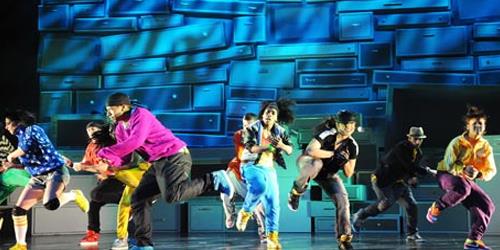 Four years ago I went to see a theatre show that incorporated hip hop dance and music with amazing stage sets, graphics and lighting. It as back at the peacock theatre in central London this month so I had to go again as I knew they would have updated the music and cast. Using dancers from all across the globe who bring their own unique style and personality to the solo and unison choreography sets, it was a great night and I cant recommend it more if you get a chance to catch it across the UK on tour. the dance sections are serious with scattered humour but the standard is high and will you holding your breath and gasping in delight like the rest of the families and dance lovers who were there.
============================================================ 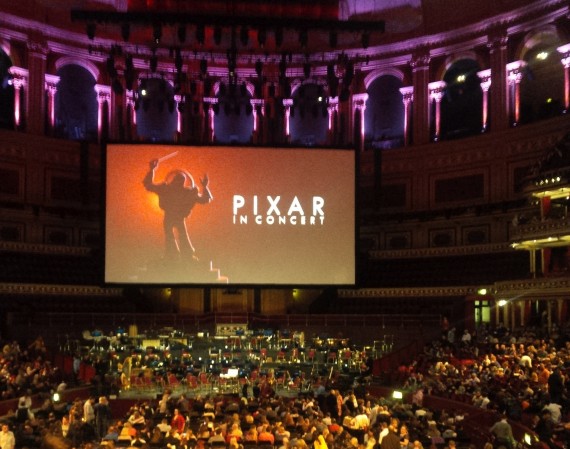 Arts and culture mystros have always liked to juxtapose various arts to create new moments.
The art of ballet brings together classical music, dance and staged sets. Gymnastic acrobats and outdoor architecture formed the free running art of parkour. Last month, I attended a recital of poetry from young; inner city youth amongst the Turner painting at Tate Britain called Poetry Luv. This past week I attended the UK premiere of Pixar in Concert at the Royal Albert Hall which brings together ground-breaking animated films beloved by children and adults alike, with the music that is in these animated movies-but performed live. From Toy Story to Brave, animation powerhouse Pixar has redefined the cinematic landscape over the past 19 years, creating gob-smacking movies, but amidst the visual wizardry, one aspect of the movies that sometimes get overlooked is the music that punctuates all the animated action.

No longer. The UK premiere of Pixar in Concert at the Royal Albert Hall brought an audience from all walks of life and those timeless scores to magical life, with a show combining stunning footage from all 13 Pixar films (which have all been written by just four composers!). With live accompaniment from not just any band, but the nearly 100 strong members of the (RPO) Royal Philharmonic Concert Orchestra! 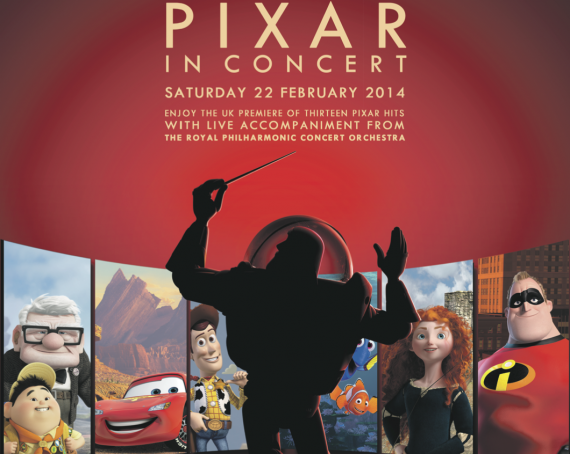 Celebrating the music from films like Toy Story, Cars, Finding Nemo, Wall-E and Up, the soundtracks always began with the orchestra for a few seconds before the visuals appeared on the giant central screen above them. The difference of course is that there are no character voices or dialogue from the films, so we were viewing simple pictures and breathtaking sound. 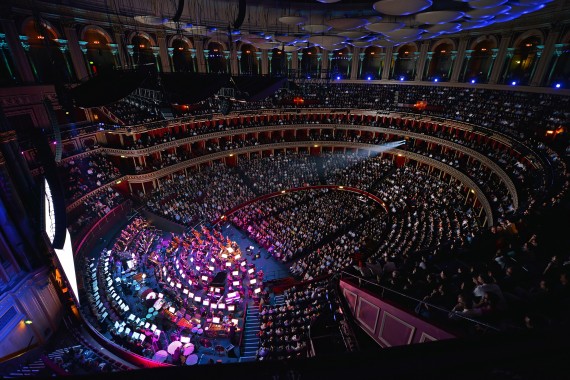 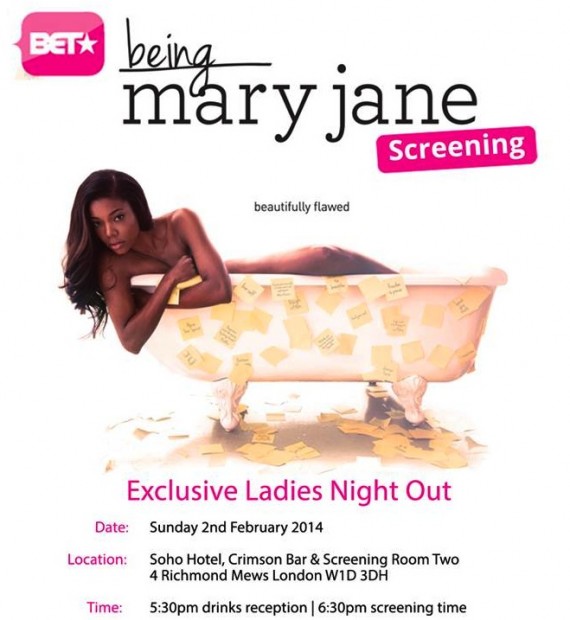 BEING MARY JANE
Have any of you caught the new BET series Being Mary Jane? I recorded a few shows at a time so I could fast forward through ad breaks and have a girly night in with my mates with a bottle of rose. We were hooked from the start! Mary Jane’s life is a parallel of so many of ours, but a few shows in I wasn’t sure if I liked her life decisions and choices although I empathise with her situation. A great series that has me totally hooked and is very right now for the new generation of media world loving sassy ladies and our dilemmas in relationships!